Please ensure Javascript is enabled for purposes of website accessibility
Log In Help Join The Motley Fool
Free Article Join Over 1 Million Premium Members And Get More In-Depth Stock Guidance and Research
By Alex Planes - Apr 11, 2013 at 11:33AM

Media titan Disney and beverage giant Coca-Cola square off in a battle of dividend fundamentals.

Dividend stocks outperform non-dividend-paying stocks over the long run. It happens in good markets and bad, and the benefit of dividends can be quite striking: Dividend payments have made up about 40% of the market's average annual return from 1936 to today. But few of us can invest in every single dividend-paying stock on the market, and even if we could, we might find better gains by being selective. That's why we'll be pitting two of the Dow Jones Industrial Average's (^DJI 0.00%) dividend payers against each other today to find out which Dow stock is the true dividend champion. Let's take a closer look at our two contenders now.

Tale of the tape
Disney (DIS 3.33%) is a 21-year veteran of the Dow, and it will be celebrating its 22nd Dow-niversary next month. Hailing from sunny Burbank, Calif., Disney is the largest diversified media company in the United States, with a history of success that spans film, broadcast, theme parks, publishing, and pretty much any other major media segment you can think of.

Coca-Cola (KO 3.08%) is a 26-year veteran of the Dow based in Atlanta, Ga. It's the world's largest beverage company, with 400 brands consumed an estimated 1.6 billion times every day. It's been one of the best dividend-paying stocks on the market for nearly a century, so Disney will have some fierce competition to contend with today.

It looks like the larger Coca-Cola has the advantage in margins today. Will it come out ahead in the battle? Let's go down to ringside and get this contest started.

Round one: endurance
According to Dividata, Disney began paying dividends in 1982 and has been paying ever since. An annual payout (last paid in December) gives Disney a 30-year streak. That's a respectable length of time, but it can't hold a candle to Coke, which began paying quarterly dividends in 1920. A 93-year payout streak lets Coke take the endurance crown without breaking a sweat.

Round two: stability
Paying dividends is well and good, but how long have our two companies been increasing their dividends? The same dividend payout year after year can quickly fall behind a rising market, and there's no better sign of a company's financial stability than a rising payout in a weak market (so long as it's sustainable, of course). Disney's annual payouts held firm through the financial crisis, so the House of Mouse has only been increasing its dividend since 2010. Coke, on the other hand, has been paying more each year for the past half-century. This one was over before it even began.

Round three: power
It's not that hard to commit to paying back shareholders, but are these payments enticing, or merely token? Let's take a look at how both companies have maintained their dividend yields over time as their businesses and share prices grow: 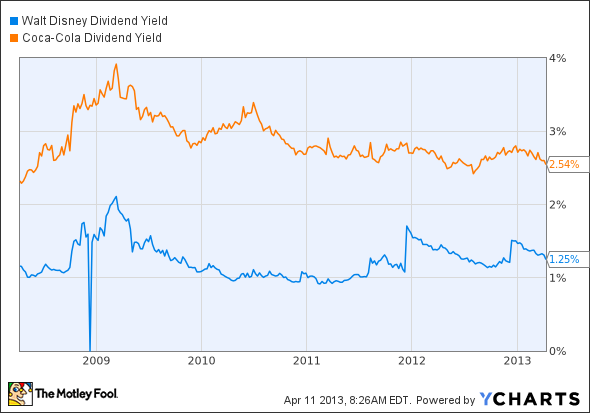 Round four: strength
A stock's yield can stay high without much effort if its share price doesn't budge, so let's take a look at the growth in payouts over the past five years. If you bought in several years ago and the company has grown its payout substantially, your real yield is likely much better than what's shown above. Unfortunately, Disney's annual payouts mess up its charting against Coke, so we have to plot them separately: 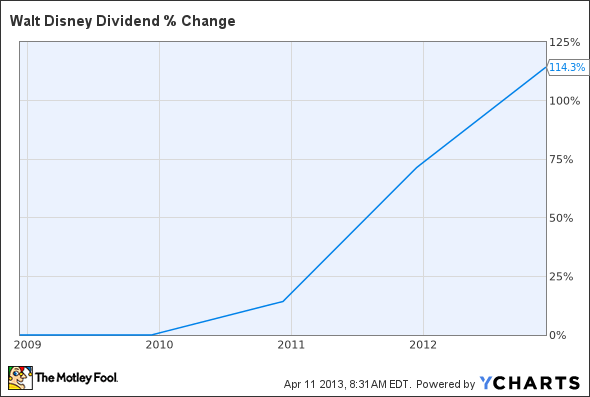 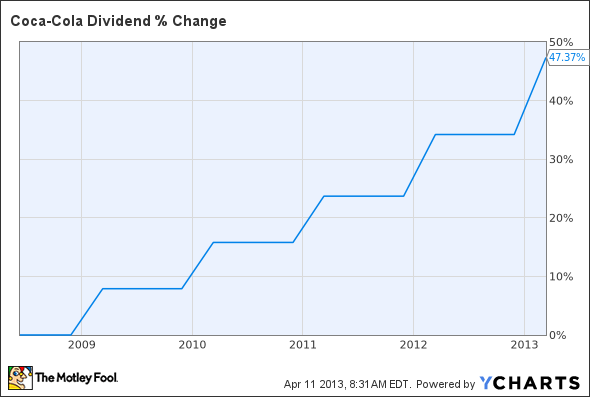 Round five: flexibility
A company -- even one as well-positioned as Disney or Coke -- needs to manage its cash wisely to ensure that there's enough available for tough times. When a company pays out too much of its free cash flow in dividends, it could be a warning sign that the dividend is at risk, particularly if business weakens. This next metric shows just how much of their free cash flows our two companies have paid out in dividends over the past four quarters: 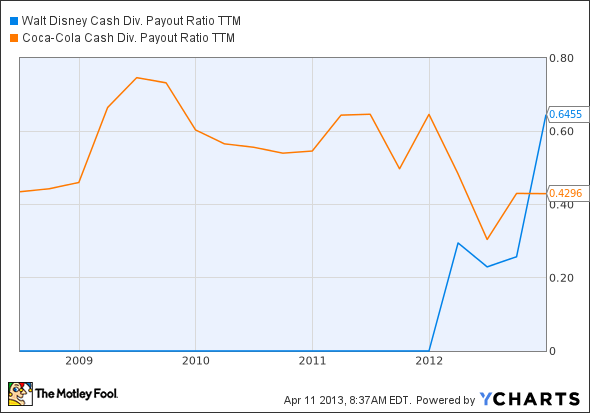 It wasn't even close this time. Coke takes the crown with a dominant display of dividend durability. Does that make it the best investment today? Perhaps not; shareholders have earned only half the return Disney shareholders have enjoyed in the past five years. What do you think? Is Coke the better investment today, or does Disney offer some non-dividend advantages that make it a superior overall stock for your portfolio?