In that spirit, we three Fools have banded together to find the market's best and worst stocks, which we'll rate on The Motley Fool's CAPS system as outperformers or underperformers. We'll be accountable for every pick based on the sum of our knowledge and the balance of our decisions. Today, we'll be discussing media and theme park company Disney (NYSE:DIS).

Disney by the numbers
Here's a quick snapshot of the company's most important numbers:

Travis' take
Disney is one of those incredible companies that will be around forever no matter what happens. As the years roll on, the company keeps adding content and incredible long-lasting franchises and capabilities for distributing its content.

When we think of Disney we often think of Mickey Mouse, Disney World, or Pixar, but Disney's most valuable asset is probably its 80% stake in ESPN. This drives its largest segment, media networks, and is the one "must have" channel for consumers around the country. Take ABC, ABC Family, Disney Channel, and all of the other channels Disney owns; I just want my ESPN. This business isn't a phenomenal growth business, growing just 5% in the first three quarters of 2012, but it's stable and profitable, which every investor should like.

In my eyes the second most valuable asset Disney owns is its slew of franchises and characters. In spending $7.4 billion for Pixar, $4 billion for Marvel, and, just recently, $4 billion for Lucasfilm, the company was shoring up popular content that will drive it into the future. But the company hasn't spent $15.4 billion on these assets just to generate box office profits. These franchises become the heart of Disney's second-largest business -- parks and resorts.

Parks and Resorts is actually the fastest-growing business in the Disney portfolio, and has grown 10% this year. It generated 30% of the company's revenue in the first nine months of the year and 18% of the company's operating income. When you look at the eye-popping figures Disney spends on buyouts, it's actually the parks that make these acquisitions truly profitable.

I also think the company is setting itself up with a fortress of content for the digital future, a future that Disney is more prepared for than any other studio. The growing popularity of Netflix (NASDAQ:NFLX), Hulu (partially owned by Disney), and Amazon.com's (NASDAQ:AMZN) streaming service provide a window into the future. These companies are just vehicles for delivering content, but there's no reason Disney couldn't deliver content on its own. WatchESPN, which brings ESPN content to your computer, mobile devices, and Xbox, shows the company has the capability, and the company's content gives it the flexibility to demand high prices from other distribution channels or build its own.

Disney isn't at the point where it will launch its own app or streaming network, but when I look out 10 years, I think owning a ton of content is a much better position to be in than owning a distribution channel like Netflix. It's analogous to owning a baseball team. If you don't like the deal a cable company offers, start your own network.

Paying 15 times earnings isn't a steal for investors, but with an eye on the long term I think the stock will still outperform the market.

Sean's take
It has truly been a remarkable year for the House of Mouse. Disney's share price has advanced 34%, crushing the S&P 500 (SNPINDEX:^GSPC), and it recently reported solid fourth-quarter earnings results. Yet for all the magic that Disney brings to the table, I have just as many concerns that this could be as good as it gets for a while.

Looking first at the positives, I have to point out the fantastic job being done by Disney's premier CEO, Bob Iger. Iger has led Disney to record quarterly results while also boosting its annual dividend by 50% and honoring America's veterans by putting them back to work. His leadership is the primary reason Disney shareholders should be thankful in 2012.

Disney's leadership in film is another saving grace. Marvel's The Avengers is the third-highest grossing film in the U.S. of all time and the highest-grossing film in 2012 by a mile. While not all of its movies are successes, those that are allow Disney to capitalize on multiple fronts, including the movie itself, merchandise sold from the movie, partnerships formed with other businesses (e.g., fast-food chains) to promote the movie, carryover to its theme parks, and eventually streaming/DVD sales.

Right now you're probably thinking, "OK, so why exactly aren't you gung-ho on Disney after mentioning these positive points?"

My skepticism (which you'll recognize as one of my defining characteristics if you've been following these weekly debates) primarily stems from Disney's historical valuation and tepid consumer spending figures worldwide.

With regard to valuation, I don't consider Disney to be ludicrously overvalued at 15 times trailing earnings. However, I think it's worth noting that at no time in the past decade has Disney traded at a higher price-to-book relative to the S&P 500 than it has this year. In terms of P/E, Disney hasn't had this type of premium over the S&P 500's P/E ratio since 2005. Disney tends to be relatively range-bound when it comes to valuation, and by all accounts, it doesn't appear to be an attractive buy based on these figures.

Difficult worldwide consumer spending prospects are also clouding my optimism for Disney. Price increases are big growth drivers at theme parks, which, as Travis notes, made up close to a third of Disney's revenue. If consumers in Europe, Asia, and the U.S. have less discretionary income due to a myriad of global factors that are slowing down growth, leisure companies like Disney will be the first to feel the pain.

Overall, I share sentiments similar to Travis'. I believe in Disney's management team, and I feel its media operations will be strong growth drivers going forward. On the other hand, this is about as pricey as I can recall Disney being in years, and the bar for future earnings reports is being set incredibly high. I'd rather wait for a better entry price than risk chasing Disney any higher.

Alex's take
Both of my colleagues have offered smart analysis on Disney's past and potential future success, and I agree with just about all of it. Well, that sure was easy. Thanks for reading!

On a more serious note, I'd like to focus on two things mentioned earlier -- Disney's parks and resorts growth, and its higher-than-normal valuation. Travis' point that the Lucas properties could become cornerstones of a deeper theme park experience is something that slipped by me at first, but which makes perfect sense on reflection. Darth Vader, Yoda, and the crew are truly iconic characters inhabiting a universe that's become part of our shared cultural experience, even if you're one of the few people to have never seen the Star Wars films. Adding that lineup to Disney World, or even developing a new cruise ship concept, would attract a group of fans outside Disney's typical wheelhouse. I bet the lure of watching lightsaber duels on the deck of the Fun Star (or whatever they choose to call it) would be tempting for many comic-con fans.

Travis mentioned the size of Disney's Parks and Resorts segment, but here's a way to appreciate the sheer scope of this segment relative to its competitors: This one segment generates more annual revenue than Six Flags (NYSE:SIX), Cedar Fair (NYSE:FUN), and Royal Caribbean (NYSE:RCL) combined. Those three companies control a total of 36 theme parks and 40 cruise ships to Disney's 11 theme parks and four ships. Disney gets some serious bang for the buck out of each of its locations, and with the additional nerdy allure of a Millennium Falcon ride or a photo op with R2-D2 to drive more customers to its parks, the gap should only widen between Disney and its peers in this segment.

Let's talk about Disney's supposedly high valuation. The company may be pricier than normal compared to the S&P 500, but it is decidedly not expensive on either a 10-year historical basis or in comparison to its peers: 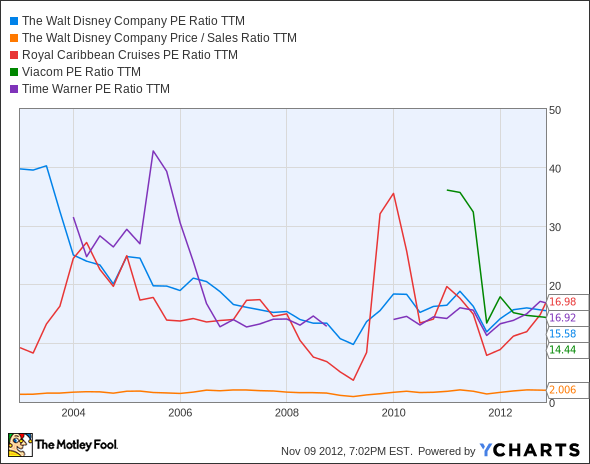 Disney's P/E, like that of many other large caps, has been in steady decline over the past decade. It's currently below both Royal Caribbean's and Time Warner's P/Es, and is close to Viacom's, despite what can arguably be called a vastly superior portfolio of entertainment options. Disney's average P/E in the past decade is 19.4, much higher than its current valuation. Over the past five years, Disney's average P/E is 15.0, which is below its current valuation, but only barely.

Nothing I can see in Disney's valuation history warns me that this stock isn't worth it today. Over the long run, there is simply no better all-around entertainment company in the world. If you want to invest in people having fun, Disney should be your first choice, now and for the foreseeable future.

The final call
Alex and I think Disney will outperform the market over the long term, and so this time we've overruled Sean's more cautious take.

For more of our stock picks and to see just how we've beaten the market by 78 points in the past six months, check out our CAPS page, found here.