Please ensure Javascript is enabled for purposes of website accessibility
Log In Help Join The Motley Fool
Free Article Join Over 1 Million Premium Members And Get More In-Depth Stock Guidance and Research
By Dan Caplinger - Apr 11, 2013 at 10:15AM

The reason why so many people follow the Dow Jones Industrial Average (^DJI 1.34%) is that it spans nearly the entire breadth of the market. The Dow goes well beyond traditional industrial stocks: You can find everything from health care stocks to financials and energy companies.

Technology plays a big role in the Dow, and several of its most recent additions have come from that space. Yet investors have been nervous about many of these Dow tech giants, as smaller competitors have gotten a jump on them in lucrative high-growth areas. Let's take a look at how the five tech companies in the Dow have fared so far in 2013 and what their prospects are for the rest of the year and beyond. 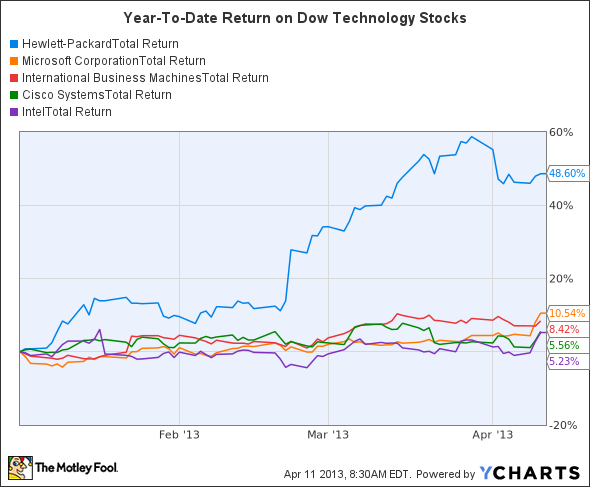 The common theme among all of these stocks is that they got their initial success from an area of the technology industry that is under threat from newer innovations. Therefore they have all had to make strategic shifts to seek out new ways to capitalize on their leadership positions.

Few stocks spark more heated debate than Hewlett-Packard (HPQ 5.62%), which has soared so far this year after plunging throughout 2012. Given the weakness in the company's traditional core segment -- PCs and associated peripherals -- HP has had to move into the server market in an attempt to seek out higher-margin, cloud-computing-related services. Yet with many of the largest server users putting together their own server designs, it's far from certain that HP can crack into the highly competitive market. And meanwhile, it will probably take longer than many investors would hope for HP to put its PC past behind it.

Similar reliance on the PC industry plagues Intel (INTC 3.06%) and Microsoft. Like HP, Intel has looked to its strength in the server chip market to bolster its flagging PC-processor business. But the real future is in mobile chips, and Intel has given competitors a big head-start in that area despite recent efforts to catch up, such as its planned Haswell chip slated for a June release. Microsoft has sought to move in nearly every direction to go beyond its PC-based software core, but it has encountered resistance at every turn, with its smartphone and tablet initiatives thus far showing mixed results at best.

Still, IBM (IBM 2.47%) has shown that such a transformation can be done. The former hardware giant has done a stellar job of moving into higher-margin server and IT services businesses. In particular, by focusing itself on the big-data needs of businesses seeking to mine voluminous amounts of information for business-enhancing knowledge, IBM managed to get an early jump on its similarly sized competitors and remain at the forefront of innovation in tech.

Increasingly, the Dow's tech giants have found themselves encroaching on each other's traditional niches in an attempt to broaden their reach. Like IBM, Cisco Systems (CSCO 3.26%) has sought to go beyond its hardware roots, using its networking prowess as an entry point to offering full-service IT solutions to its customers. Yet decisions to boost its dividend substantially in recent years suggest that the networking giant sees a limit to its growth potential going forward.

What's next for tech?
Yesterday's big gains for technology companies suggest that the sector might lead the way forward if the bull market keeps roaring ahead. At compelling valuations, the combination of value and growth give tech investors an unusual opportunity for big potential gains.