Please ensure Javascript is enabled for purposes of website accessibility
Log In Help Join The Motley Fool
Free Article Join Over 1 Million Premium Members And Get More In-Depth Stock Guidance and Research
By Justin Loiseau - Apr 11, 2013 at 10:54AM

Initial jobless claims fell 10.8% to a seasonally adjusted 346,000 for the week ending April 6, according to a Labor Department report released today.

Compared to the previous week's 8.7% jump, this latest report comes as a reprieve after three straight weeks of initial claims increases. Market analysts had expected only a drop to 365,000 initial claims. 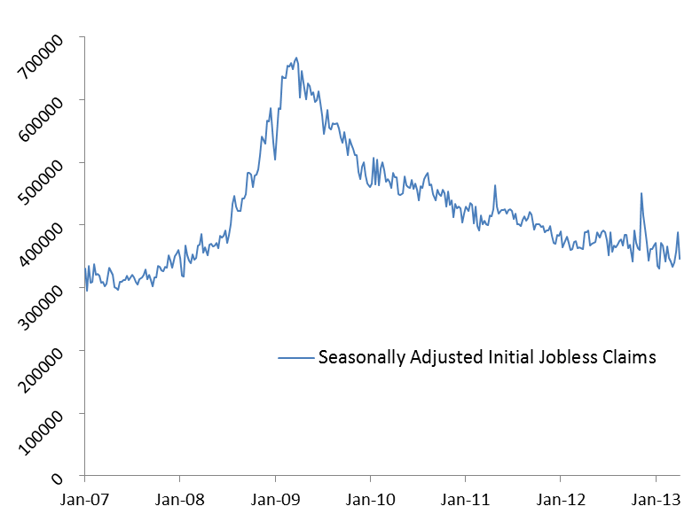 While the four-week moving average bumped up 0.8% to 358,000, both the most recent week's number and the moving average clocked in solidly below 400,000, a cutoff point that economists consider a sign of an improving labor market.

On a state-by-state basis, four states recorded decreases of more than 1,000 in their initial jobless claims for the week ending March 30 (most recent available data). Texas led the improvement (-3,490), followed by California (-2,660), North Carolina (-1,600), and Arkansas (-1,220). North Carolina was the only state to submit a reason for the drop, citing fewer layoffs in food and business industries.

For the same week, six states recorded increases of more than 1,000. Pennsylvania clocked an additional 3,015 initial claims, followed by New Jersey (+2,410) and Illinois (+2,150). Transportation and construction layoffs were a common theme for the slump.