An investment that PNC Financial made over 10 years ago is still reaping rewards today.

As a fan of regional banks over their much larger compatriots, PNC Financial (PNC -1.41%) is one bank that has always interested me, so I decided to take a deeper look at the bank to get a better understanding of how it operates. Last week, we looked at where the Pittsburgh-based bank made its money, as well as just how profitable it is. With this article, we will look at a small -- yet very profitable -- piece of PNC's business, and why investors should take note of it.

The business of PNC Financial
As mentioned in both of the previous articles, PNC Financial breaks its business into six different business segments, the largest being its traditional retail banking business. However, it is the smallest segment that is perhaps most interesting:

As you can see, PNC's investment in asset management firm BlackRock was responsible for only 3.4% of the bank's total revenues. However, because of the segment's high profit margin, it accounted for 11.6% of the net income earned by the bank last year. That's quite impressive for a passive equity investment, so let's take a look at what BlackRock is and how PNC Financial makes money from it.

What is BlackRock?
BlackRock started in 1988 as part of The Blackstone Group, later merging with parts of PNC's asset management subsidiaries in 1995 and becoming an independent company owned by PNC Financial.

It went public in 1999, and since then has grown into the world's largest publicly traded investment management firm, with over $3.7 trillion of assets under management. It is probably best known for its iShares-branded ETFs, though it also offers mutual funds and other investment products.

When BlackRock went public in 1999, PNC still owned 70% of the company, a position the bank has gradually reduced over subsequent years to its current 22% ownership. As BlackRock has grown to its current size, PNC has been along for the ride, reaping the benefits of ownership along the way, with $1.8 billion in unrealized gains. BlackRock's performance over the past 10 years helps illustrate why PNC benefits from its investment: 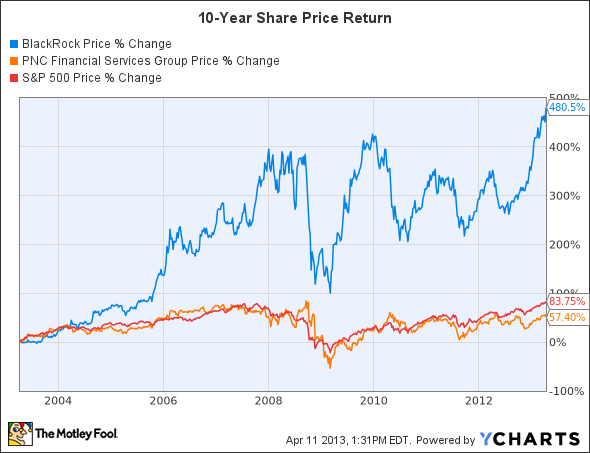 Equity investments are not unique
PNC is far from the only company that reaps rewards from the performance of companies it invests in. Probably the best example is Berkshire Hathaway (BRK.B -0.41%). Though it makes most of its money from its insurance operations and other wholly owned companies, Berkshire's large investment portfolio accounted for nearly $8 billion in revenue during 2012.

Ownership stakes like this require little action from the likes of Berkshire Hathaway or PNC Financial, instead allowing the companies to have cash available for other operations. In the case of PNC, the income from its investment in BlackRock more than covers the loss it experienced in its residential mortgage segment, helping the bank perform better without having to do a lot of additional work.

The Foolish bottom line
Having a sizable investment in another company does not make PNC Financial unique. However, its investment in BlackRock has been very lucrative over the past decade, and should continue to add money to the bottom line as long as BlackRock keeps humming along. It is important for PNC investors to understand the relationship between the two and keep an eye on how BlackRock is contributing to the performance of PNC Financial.

It's Not Too Late to Buy This Powerhouse Dividend Stock