If you own stock in New York Community Bancorp or are thinking about buying it, then at the very least, you should know these nine critical numbers.

Given that you clicked on this article, it seems safe to assume you either own stock in New York Community Bancorp (NYCB -0.05%) or are considering buying shares in the near future. If so, then you've come to the right place. The table below reveals the nine most critical numbers that investors need to know about NYCB stock before deciding whether to buy, sell, or hold it.

NYCB traces its roots back more than 150 years to its founding in 1859 in the Queens borough of New York City. While it remains principally a community lender -- albeit in the massive New York City metropolitan area -- it has grown into one of the largest financial institutions in the country, with more than $44 billion in assets on its balance sheet. Its particular specialty is loans to owners of large multifamily buildings. And it executes this through 240 branches operating under a variety of trade names including Queens County Savings Bank, Roslyn Savings Bank, Richmond Country Savings Bank, and others. While it doesn't completely come through in the nine numbers above, NYCB is known for three things. The first is its prudent management of credit risk. So prudent, in fact, that NYCB was able to decline TARP funds during the financial crisis and do just fine. The second thing is its massive dividend yield. At 7.4%, it's one of the largest in the industry. And the third thing is its simply spectacular returns to shareholders. Since going public in 1993, owners of NYCB stock have earned over 2,500% on their original investment. To put that in context, the S&P 500, with dividends included, has returned just north of 400% during the same time period. 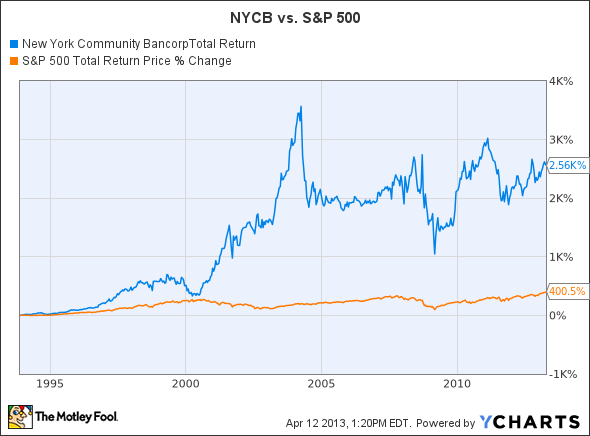 On the other hand, the biggest issue isn't with what it's already done, but rather what it may be about to do. NYCB freely admits to its "acquisition-driven expansion of our franchise." Since the financial crisis, for example, it's purchased two banks from the FDIC, giving NYCB exposure to new markets in Arizona and Florida.

The problem, in turn, is twofold. First, as a general rule, growth through acquisition usually turns out poorly -- just ask Bank of America or Huntington Bancshares, both of which nearly went under following imprudent and ill-timed acquisitions. In NYCB's case, given its history, I think this is less of a concern -- though, you never know. But second, regardless of how immediately accretive a new acquisition would be for NYCB's current shareholders, it would almost inevitably bring the bank above the critical $50 billion threshold. Above this demarcation point, the Federal Reserve gets to exercise significantly more sway over capital allocation decisions. And suffice it to say, regulators may not be as comfortable with NYCB's generous payout ratio as, say, NYCB's shareholders have come to be.