Buffett's buy-and-hold-forever strategy has backfired on this stock..

Global beverage titan Coca-Cola (KO -0.21%) has for a long time been one of Warren Buffett's largest holdings at Berkshire Hathaway (BRK.B -1.08%). Buffett began purchasing Coke stock in 1988, and the stock saw tremendous gains for the next decade, leading some observers to call Coca-Cola one of his greatest investments. Yet the stock's performance since 1998 has been decidedly mediocre.

Coke stock has joined in the recent market rally, more than doubling off its Great Recession low. That said, I'm skeptical that the company will be able to grow its bottom line enough to justify its generous P/E ratio of 20.7. Coca-Cola may therefore continue its long run as one of the biggest dogs of Buffett's portfolio.

A love affair with Coke
Coca-Cola has been the largest holding in Berkshire Hathaway's equity portfolio for much of the past two decades. In the earliest 13F filing available online from the SEC -- for the first quarter of 1999 -- Berkshire Hathaway reported holding 200 million shares of Coke stock, valued at $61.375 a share, or more than $12 billion in total.

Buffett is often associated with the "buy and hold forever" investing strategy, and this is exactly what he has done with Coca-Cola. Berkshire Hathaway still owns every one of those shares -- although a recent stock split means that Berkshire now owns 400 million Coke shares, valued today at more than $16 billion. That makes it the second largest holding in Buffett's portfolio, only recently eclipsed by Wells Fargo.

Yet Coca-Cola has basically been a dud in Buffett's portfolio for the past 15 years. While the stock has recovered very nicely from the global recession in the past four years, it still sits below the all-time high it touched all the way back in mid-1998: 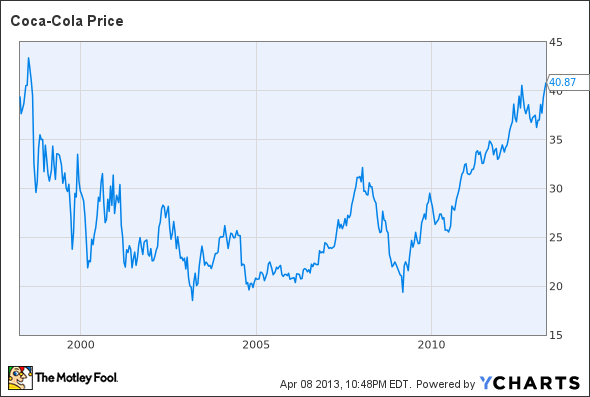 Of course, the stock market as a whole hasn't performed too well for the past 15 years, either. There was a crash at the end of the bubble period in 2000, followed by a second crash associated with the 2008-2009 recession. Still, the S&P 500 has outperformed Coke stock by nearly 40% over the whole 15-year period: 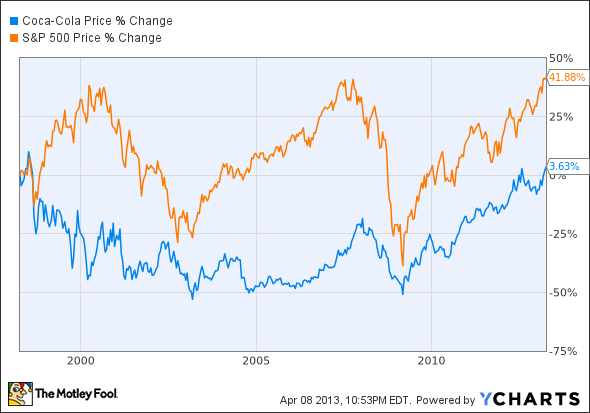 Poor total return
From a total return perspective -- which includes the benefit of dividends -- Coca-Cola has still been a poor investment since 1998. Since June 1998, Coke stock has generated a total return of 33%. Obviously, that's a lot better than losing money; however, it represents a less than 2% annualized return. Buffett could have done better in government bonds! 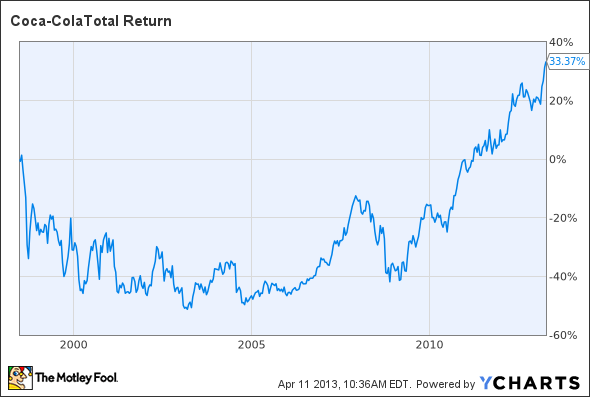 In short, this means that Buffett and Berkshire Hathaway investors have had a lot of money tied up in an underperforming stock for a very long time. Coca-Cola was a great investment in the 1990s, but in retrospect, Buffett clearly should have sold when the shares spiked in 1998. Furthermore, I would argue that it should have been obvious at the time that Coke was overvalued. Based on Coca-Cola's EPS of $1.64 in 1997, the company was trading at 50 times earnings when it peaked in mid-1998. When that happened, Buffett should have ignored his "buy and hold forever" mantra in favor of his equally famous advice: "Be fearful when others are greedy."

Foolish conclusion
In 1998, Buffett looked like a genius for buying Coke stock when he did. In 10 years, Coca-Cola had returned more than 1,000%. That strong initial performance makes Coca-Cola look like a good performer in Buffett's portfolio when considering the full 25-year holding period to date. Yet the stock has been a dud for the past 15 years, drastically underperforming the S&P 500 and offering a total return of approximately 2% annually.

Looking forward, I don't think the next decade will be much better than the last one for Coca-Cola. Coke stock currently trades at 20 times earnings, which is fairly pricey considering that analysts are expecting earnings growth in the high single digits for the next few years. Sugary beverages are no longer a growth product. If anything, the rise in health consciousness (and anti-soda campaigns such as Michael Bloomberg's crusade in New York) will cause a slow decline in demand for Coca-Cola's products. Thus, Coke may continue to be an underperformer in Warren Buffett's portfolio for the foreseeable future.

Fool contributor Adam Levine-Weinberg has no position in any stocks mentioned. The Motley Fool recommends Berkshire Hathaway, Coca-Cola, and Wells Fargo and owns shares of Berkshire Hathaway and Wells Fargo. We Fools don't all hold the same opinions, but we all believe that considering a diverse range of insights makes us better investors. The Motley Fool has a disclosure policy.