One way to think about the market is in terms of money flows between assets with different risk characteristics. When times are good, money moves out of bonds, which are perceived as safe because bondholders take priority in liquidation proceeds, and into stocks, which are riskier because their owners are last in line. When times are bad, it's the opposite.

The same can be said within asset classes as well. Riskier bonds, known as junk bonds, are more popular when the economy is perceived to be safe, while safer stocks (generally those that pay high dividend yields) demand higher premiums when times are tough. With that in mind, it should be no surprise that the latter are trading for higher multiples than ever.

The conversation about a "dividend bubble" began in earnest at the beginning of last year. As my colleague Morgan Housel said in February 2012, "there's an argument to make that, just as investors ran blindly into subprime bonds five years ago in search of yield, they're running blindly, carelessly into dividend stocks today."

Morgan cited a number of examples to support his case. Consolidated Edison (ED 0.71%), a utility stock that pays one of the best yields on the S&P 500 (^GSPC 2.47%), had returned 50% in the two preceding years. And shares of Altria (MO -0.13%) were up by roughly the same degree despite a "string of dismal earnings reports as smoking rates decline."

It wasn't just market commentators who were thinking along these lines. Here's a chart from Google showing the popularity of the search term "top dividend stocks." As you can see, it started to gain traction in the middle of 2007 and has accelerated in popularity since.

So where are we now? Has the bubble popped? Has it deflated? Was it much ado about nothing?

Here's what he had to say about dividend stocks in particular:

Q: What do you see as the risk to dividend stocks?

A: Many stocks with high dividends don't have growth potential. Their payout is their primary appeal. Utility stocks, for instance, [are perceived to] have safe dividends. So a lot of people are buying them.

Recently they were trading at a 50% premium to their historical average valuation. That's their biggest premium ever. Most utilities are heavily leveraged, strictly regulated, and very sensitive to changing energy costs. That doesn't sound like a safe investment to me. But people perceive them as safe and are giving up some good returns in other places to buy them. 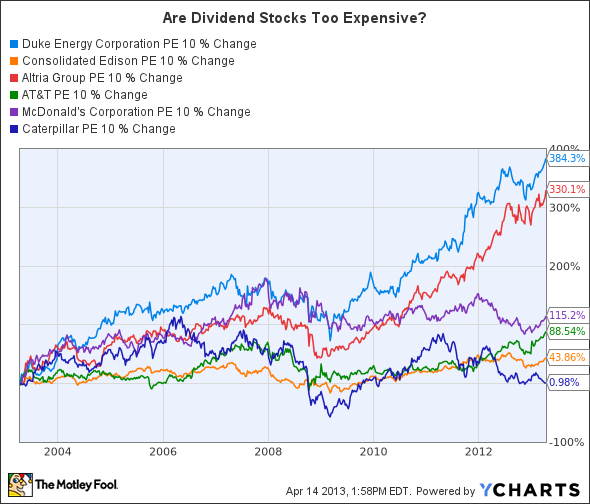