Please ensure Javascript is enabled for purposes of website accessibility
Log In Help Join The Motley Fool
Free Article Join Over 1 Million Premium Members And Get More In-Depth Stock Guidance and Research
By Dan Caplinger - Apr 14, 2013 at 9:00AM

Take a look at how these massive businesses have performed this year.

For those seeking the biggest, most stable stocks in the market, the Dow Jones Industrials (^DJI 1.61%) includes the leaders of many different industries. But you'll also find a wide range of companies that avoid specializing in particular areas, instead aggregating businesses from different industries in an attempt to create broadly diversified holding companies.

Conglomerates in the Dow are particularly interesting because they provide a window into what diversified businesses see as their best profit opportunities. Let's look at how the Dow's conglomerates have fared so far in 2013 and what their prospects are for the rest of the year and beyond. 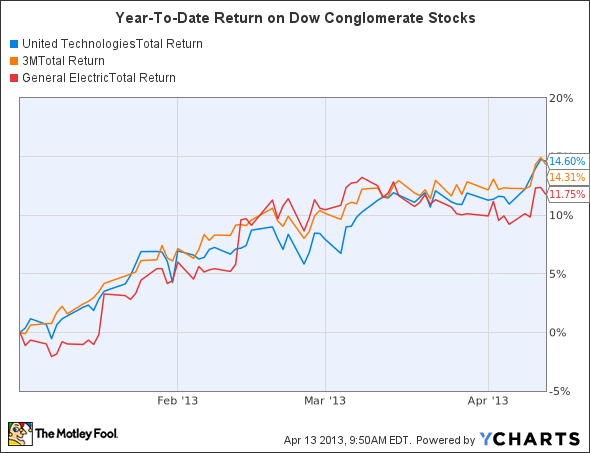 Conglomerate stocks have performed quite well recently, with all three of these companies having outpaced the Dow's overall return. But a big part of the reason has to do with the pace at which many conglomerates are straying from their diversified histories to concentrate more on high-growth industries.

United Technologies (RTX 1.54%) has gone through the biggest transformation recently. Its massive $16.5 billion acquisition of Goodrich represented a big commitment from United Tech to look to the aerospace sector as its primary means of making profits. Since the takeover, United Tech has sold off non-core assets to satisfy regulators, raise cash to help pay down the debt it incurred in the buyout, and refocused its efforts toward a single industry. Yet it has still retained its Otis elevator business along with other industrially focused units, such as its Carrier HVAC division, that give the company some diversification.

For General Electric (GE 3.33%), the trend has been to de-emphasize its financial business in returning to its industrial roots. But that hasn't stopped the company from moving in interesting new directions, broadening its energy focus to include both traditional fossil-fuel and renewable-energy infrastructure. Moreover, GE's foray toward mining equipment will challenge some of the biggest companies in the business.

Finally, 3M (MMM 0.86%) is best known for its consumer products, but it makes a huge array of goods for industrial use. Its purchase of ceramics specialist Ceradyne expanded its business, with a particular emphasis on defense- and energy-related applications that the company offered 3M. With health care, safety and security, and electronics also within 3M's portfolio of businesses, the company is looking now toward restarting its innovation engine in all of its focus areas.

Will conglomerates de-conglomerate?
Historically, conglomerates have gone through cycles of popularity, with periods of big mergers and diverse combinations eventually giving way to periods of corporate break-ups and spinoffs. Right now, we're in an anti-conglomerate phase, but with merger activity picking up in some industries, it'll be interesting to see if that trend reverses itself. Meanwhile, shareholders have to be happy with the results that the Dow's conglomerates have produced lately.