Please ensure Javascript is enabled for purposes of website accessibility
Log In Help Join The Motley Fool
Free Article Join Over 1 Million Premium Members And Get More In-Depth Stock Guidance and Research
By Dan Dzombak - Apr 14, 2013 at 9:35AM

Hold on to your wallet.

There's little time left until taxes are due. While seven states have no income tax, 43 states and D.C. do. Most states use some type of progressive tax on income so that people with higher incomes pay higher rates, and that makes calculating how much you owe to be quite a hassle.

Let's look at what your income-tax burden would be if you were filing independently with an income of $100,000, as simply looking at a state's absolute highest income-tax rate can offer a distorted picture. 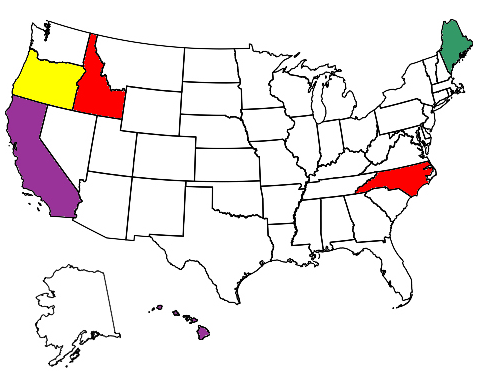 While these states (and D.C.) have high income taxes, everyone's situation is different. In some cases, a life of paying fewer taxes is as simple as picking up and moving across state lines. Before you do, though, you should take into consideration how each state makes money, and you'll also want to figure in local taxes and how those will affect your particular situation. A good place to start is the Tax Foundation, which has been collecting data on taxes since 1937 and takes into consideration an average of both state and local taxes.

The tax leaders
Let's go through the states with the highest income tax one by one, using the Tax Foundation's most recent data, which is from July 2012.

6. California
California has a progressive income tax that starts at 1% and then rises multiple times before it hits 9.3% on income above $48,029. The rate rises higher for those earning more than $1 million, to 10.3%, the second highest state marginal rate behind Hawaii's 11%.

7. Idaho
Seventh on our list is Idaho, which has a progressive tax that starts at 1.6% and rises multiple times before peaking at 7.4% on income above $10,350.

It's not all about taxes
Again, if you're thinking about moving to avoid a big tax hit, there's more to consider than just tax rates -- but it doesn't hurt to start there, especially if you're living off interest and dividends.