Nine million fewer Americans were working in early 2010 than were in early 2008. But there was something strange about the jobs bloodbath: Not that many people were actually laid off during the recession. Layoffs and discharges peaked at around 2.4 million in January 2009. Compare that to the 2.2 million people laid off in early 2001, or the 1.9 million Americans laid off in 2007, and the figures aren't that shocking.

How can that be?

What caused employment to melt away in 2009 and 2010 was not that so many Americans were being laid off, but that so few companies were hiring. Companies are always laying off workers, but those workers usually find a new job right away. During the recession it was different. Those who lost their jobs found it nearly impossible to find a new one. So they became unemployed.

Here's one way to look at it: 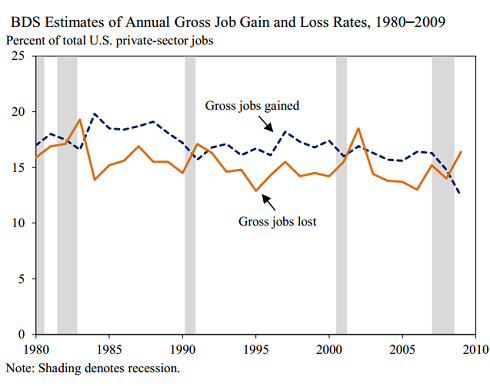 Now, this caused an entirely predictable outcome: Those who kept their jobs during the recession held onto them for dear life. Voluntary job quits plunged.

But that's starting to change.

That's a sign of optimism returning to the labor market.

And it's a rational one, too. People are more optimistic about the labor market because more businesses are hiring. Job openings in February hit the highest level in five years. This chart, from the Bureau of Labor Statistics, tells the full story: The question now is whether those who have been out of the labor force for the last four or five years have the skills to compete for the new positions companies are adding. Many of them won't. The longer you're out of work, the harder it is to get back in -- skills atrophy, confidence dwindles, and resumes go stale. University of Michigan worried in 2011:

I'm terrified that if we leave millions of people out there decreasingly engaged with the world of work, structural unemployment may become an American problem in ways it has been a European problem.

So, things are getting better in the jobs market. But the scars left from the Great Recession may never fully heal.