The megabank had its dividend options limited by regulators in 2008, but the government recently eased those restrictions. Will Bank of America stock ever become an income-generating powerhouse again?

Bank of America (BAC -1.23%) suffered more than most megabanks in the financial meltdown of 2008. Its dividend policies have been under a heavy regulatory thumb ever since, but the government recently eased those restrictions a bit. Will Bank of America stock ever become an income-generating powerhouse again?

The mortgage-fueled crisis of 2008 took a heavy toll on Bank of America's investors, and the loss of a stellar dividend policy played a major part. Leading up to the meltdown, the stock had provided a yield north of 3.5% since the end of 2003, and the yield has rarely approached 1% since that adjustment. These dramatically reduced payouts shocked investors stiff. 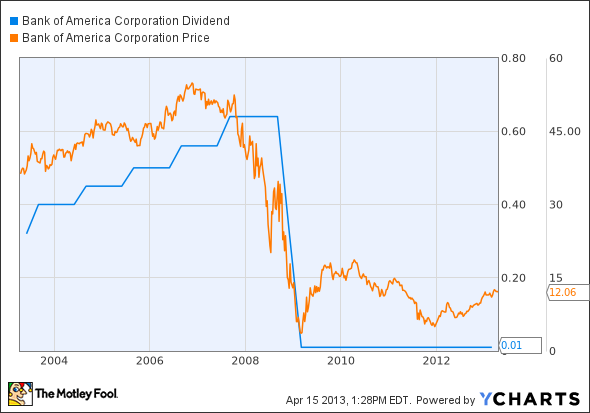 Bank of America finally aced the government's financial stress tests and was given a nod of approval for its capital plans. However, these plans did not include any kind of immediate dividend increase. Instead, the bank will put $5 billion into share buybacks and another $5.5 billion into preferred-share redemptions.

But a dividend boost was certainly on the table. Some of Bank of America's large rivals asked for, and received, such approvals with similar stress-test results in hand. What would $10 billion of additional dividend spending have done for the bank's shareholders?

It would have been a substantial boon indeed. The company funneled a total of $1.9 billion into dividends over the last year, so adding $10.5 billion to that shareholder-friendly line would have multiplied the payout by 5.5. At current share prices, that would work out to a 1.7% yield.

That's far from the consistent 3.5% yields of a decade ago and still well below the average yield of Dow Jones (^DJI -0.75%) components. But an increase like that would also be a vote of confidence in the bank's fundamentals, and income investors would come looking for signs of future increases. Keep in mind that fellow Dow member JPMorgan Chase (JPM -1.48%) also saw its dividend cut to ankle-high levels but now offers a decent 3.1% yield. JPMorgan has crushed the Dow in the long run, largely thanks to its resurgent dividends.

Like JPMorgan's, Bank of America's shares should see a healthy boost if and when the bank's management makes a firm commitment to dividend payouts again. That's when the bank stock truly takes back its status as a driver of Dow value, rather than a drag on the index.