On Thursday morning, Rite Aid (RAD 10.69%) posted a fourth-quarter EPS of $0.13, which beat the average analyst estimate for a slight loss. This quarterly profit -- the second in a row for Rite Aid -- allowed the company to post its first full year of profitability since 2007. This surprisingly strong performance caused Rite Aid shares to soar nearly 30% over the course of Thursday and Friday, to highs not seen for almost five years. 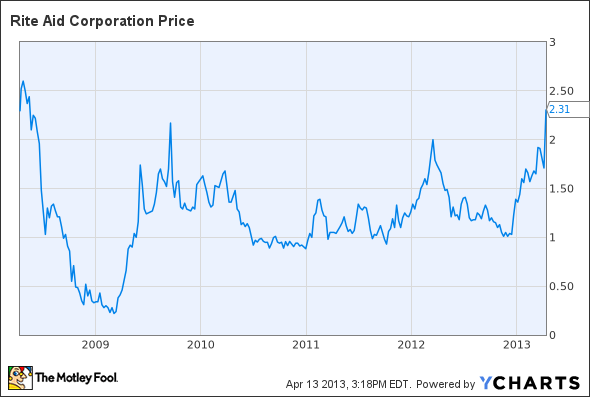 Strong results, modest outlook
Rite Aid's profit was driven by three major one-time or short-term impacts. First, the company gained a number of new customers from Walgreen's dispute with pharmacy benefits manager Express Scripts (ESRX). Walgreen's stores rejoined the Express Scripts network as of Sept. 15, and customers are beginning to trickle back, but Rite Aid still saw a significant benefit from the dispute in fiscal year 2013. On Rite Aid's Thursday morning conference call, executives estimated the full-year benefit at $70 million -- more than half of the company's fiscal year 2013 profit.

Second, Rite Aid -- as well as other pharmacy chains -- gained additional sales this quarter from a particularly bad flu season. For example, in January, Rite Aid reported a 5% increase in prescription count, with more than two-thirds of the increase attributable to flu shots and flu-related prescriptions. Last, pharmacy chains achieved higher profit margins this year due to the introduction of a number of new generic drugs, which are more profitable than brand-name drugs.  Over time, reductions in insurance reimbursement rates will negate this margin increase.

Looking forward, Rite Aid expects same-store sales, adjusted EBITDA, and net income to all be roughly flat next year. Management called attention to the loss of some Express Scripts customers who will return to Walgreen's, fewer generic introductions, and reductions in reimbursement rates as major headwinds for fiscal year 2014. If Rite Aid executives are being overly conservative with their guidance, then the stock could continue to rise. However, based on Rite Aid's fairly uninspiring March sales results, I think the guidance for flat sales and earnings next year is very appropriate.

Encroaching competitors
Longer-term, I think Rite Aid will have trouble remaining profitable in the face of strong competition from its two larger rivals. Rite Aid has benefited from trends such as the growth of generics and the aging of the U.S. population, which are helping the whole industry. For Rite Aid, improving industry conditions have allowed the company to reduce its leverage while remodeling a few hundred stores each year. By contrast, Walgreen and CVS have more resources at their disposal, and so strong profitability has encouraged expansion. In their most recent fiscal years, CVS added 131 stores, and Walgreen added 175 stores.

Convenience is paramount in the drugstore business, and as Walgreen and CVS add locations -- thereby moving closer to customers -- they will gain market share. Expansion will also increase economies of scale for both chains. Rite Aid does not have the capital resources to expand, and has actually been reducing its store count. In the short term, closing underperforming stores should boost Rite Aid's profitability, but in the longer term, this will increase the competitive advantages of Walgreen and CVS.

Buyer beware
Rite Aid's high leverage gives the stock substantial upside if management is able to enact a sustainable turnaround. However, I am not optimistic about Rite Aid's chances in an industry where its two main competitors are significantly larger and expanding, while Rite Aid is slowly shrinking. As Walgreen and CVS move closer to customers through store expansion, Rite Aid will struggle to maintain its market share. As a result, the company's return to profitability could prove short-lived.