Investors are cheering a small profit beat from global beverage giant Coca-Cola (NYSE:KO) today, and shares are up more than 5% in a rare pop for the slow-and-steady outperformer. Let's dig into the details to find out why Wall Street is so excited about this century-plus stalwart's prospects.

What the numbers tell us
Coke reported revenue and net income that both came in slightly below the year-ago quarter's results. On the top line, Coke's $11.04 billion in revenue fell short of 2012's $11.14 billion, which the company blamed on currency exchange rates and two fewer days of reported sales than last year. Despite this weakness, Coke beat analyst expectations of $10.97 billion in revenue. On the bottom line, Coke's $1.75 billion in GAAP profit ($0.39 per share) dropped from last year's $2.1 billion ($0.45 per share). However, adjusted earnings came in at $0.45 per share, a penny ahead of expectations. Here's how Coke's earnings look on a longer scale: 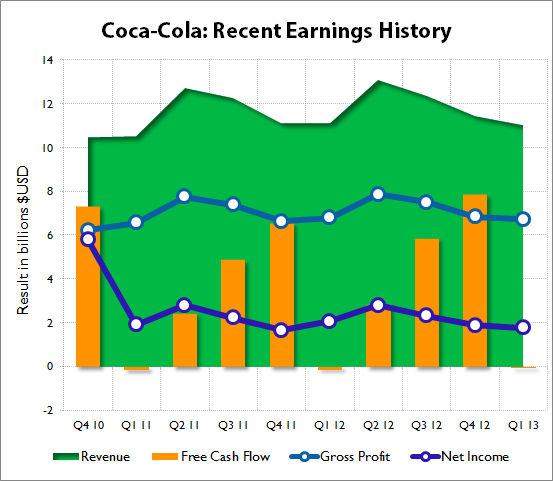 All this demonstrates is that Coke is enjoying the benefit of lowered expectations today. Its results have historically been cyclical (and those free-cash-flow numbers are cumulative over the course of a year), but there's been very little change in the company's reported revenue and earnings in recent years, 2010's one-time gain notwithstanding. However, there were also some interesting breakdowns and analysis in the latest report, which might well account for some of today's investor optimism.

What the future looks like
Coke continues to grow internationally , but it posted 3% volume growth in the Americas compared to 5% in its international segment. Noncarbonated beverages are overtaking Coke's flagship "sparkling" lines in growth, with 6% volume growth around the world for still beverages doubling the growth rate of carbonated drinks. Thailand (up 18%), India (up 8%), and Russia (up 8%) presented the strongest international opportunity, but Coke's Chinese business barely moved, finishing the quarter with a mere 1% gain. Chinese weakness was blamed on a slowing economy and lousy weather. Two Japanese brands, a bottled water and a green tea, are both billion-dollar moneymakers for Coke now, posting 22% growth and 13% year-over-year growth, respectively. In addition:

Coke's most notable report, though this was already known since last week, was its intent to expand its relationship with independent U.S. bottling companies in a franchise-type model. The company will expand the territories available to five regional bottlers, reducing its control of the U.S. bottling business by about 5% down to 74.5%. Coke CEO Muhtar Kent has indicated that the company might ultimately franchise out the territories completely. This is likely to improve margins, which should keep Coke investors happy as the company runs up against the limits of its customers' stomachs. Will it justify continued share-price growth? Probably not -- but that's what international expansion is for.