As rail takes over as the vehicle of choice for crude oil, its none other than Warren Buffett that's taking it for a ride.

I've been following the remarkable rise of the railroads as the preferred shipment option for our increased crude oil production. Last year, crude oil and petroleum products delivered by rail rose by over 30%. This was driven primarily by the rise in production coming out of North Dakota's Bakken region.

Bakken producers like Continental Resources (CLR 4.45%) seem to have a sweet spot for this age-old mode of transportation. The company and its peers had been producing more oil than the current pipeline infrastructure could handle. That created a huge differential between the price of Bakken crude and that of U.S. benchmark West Texas Intermediate. However, thanks to the rails, that differential has come down significantly.

In one of the best quotes from earlier this year, Continental President and COO Rick Bott told investors: "We've recently seen a significant improvement in Bakken oil price differentials, reflecting higher volumes being shipped by rail to the coasts and the anticipation of increased pipeline capacity ... We now have excess transportation capacity in both pipe and rail, and, with additional infrastructure projects in the planning and construction stages, capacity should remain ahead of Bakken production growth."

That has been very good news for producers and a certain railroad owner. However, it could be very bad news for the future of pipelines. Take a look at the following chart from Continental and I'll explain what I mean: 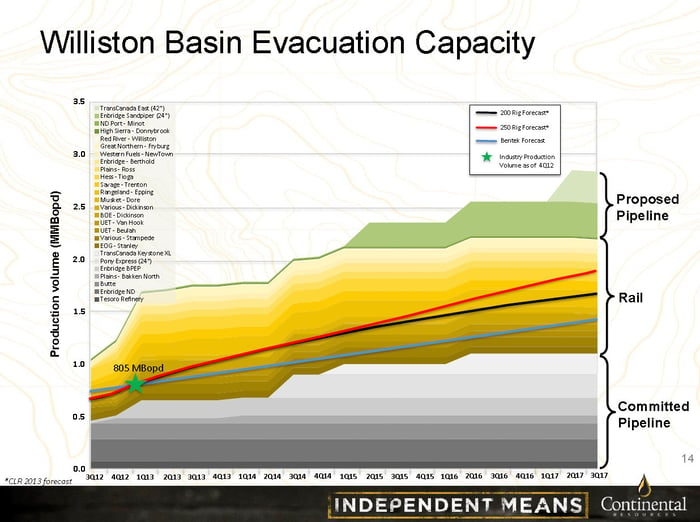 In the investment world we like to talk in terms of a company having "first-mover" status because it can lead to a sustainable competitive advantage. Those tend to be very good for future profits. What we're finding here is that the rails are proving to have one major advantage over pipelines which could indicate that they are here to stay as the vehicle of choice for Bakken crude. Because this advantage is already being realized it will make it even tougher for the competition (in this case, pipelines) to move in on its territory.

This important advantage is rather simple -- with rails you can easily transport crude oil to both coasts. That's something that's not currently possible by pipeline. Even with the added shipping costs domestic oil is still much cheaper than imported oil. That's why you are seeing refiners like Phillips 66 (PSX 3.09%) really step up their activities to access crude oil by whatever means possible, including rail.

Because of this advantage, rail has the potential to stick around and be more than a short-term solution. It's already starting to affect pipeline projects; as late last year ONEOK Partners (OKS) announced that it was not moving forward with its proposed Bakken Crude Express pipeline project after the company couldn't secure the necessary long-term commitments. It could also mean that some of the proposed projects from the chart above might not need to be built. With ample rail capacity, producers might elect to keep riding the rails.

The big winner here? Warren Buffett's BNSF which is a subsidiary of Berkshire Hathaway (BRK.B 2.12%). The company is transporting about a third of the Bakken's oil production. That led the railroad company to experience a 60% jump in crude and petroleum product shipments in the first half of 2012. Overall, the company's CEO said it likely moved 350 million barrels of crude in 2012. With its major presence in the play, Buffett's railroad is strategically positioned to benefit from this trend.

Another big winner when it comes to crude oil by rail is Plains All American Pipeline (PAA 1.41%). Late last year the company spent $500 million to acquire five terminals to complement its existing facilities. Overall the company is expected to have 250,000 barrels per day of loading capacity with another 335,000 barrels per day of unloading capacity. Because of the limited pipeline connectivity to the east and west coasts, Plains has the facilities to enable the delivery of cheaper Bakken crude to coastal refineries.

The key takeaway here is this -- rails could be part of the permanent solution to move oil from production basins to market centers. As we've seen with the Keystone XL debate, its tough to get a major pipeline built in this country, making it less likely that we'll see a major east or west coast pipeline built. That means more oil is likely to keep flowing through the rails, with Warren Buffett being its conductor of choice.