A company's stock price is a reflection of its current and future value. Although market fluctuation can affect any stock's soar or stumble, investors should pay extra attention to companies hitting record highs. Let's take a look at three utilities hitting 52-week highs -- and one that's in the dumps -- to see what dividend stocks have to offer.

Regulations station
Ameren (AEE 0.71%) missed last quarter on sales and earnings, but the company's making major moves to stabilize its income. Since an announcement last December, Ameren has been selling off its generation business to move entirely into regulated territory.

For investors, that means predictable profit. The company won't win any growth awards anytime soon, but its revamp and 4.6% dividend yield seem more than enough to woo income investors and boost its stock by 9.9%. 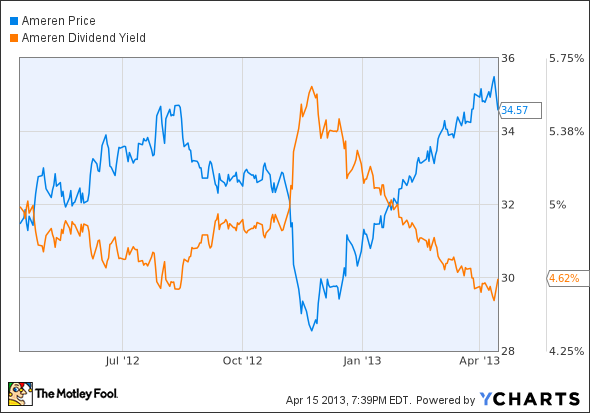 Bucks from the Brits
PPL (PPL 0.40%) managed to wow investors in 2011 when the company beat analyst estimates for four straight quarters. When it did it again in 2012, it was really only a matter of time until its shares hit a new 52-week high, now up 17.7 % in the last year. With 85% of 2013 earnings per share (EPS) originating from regulated business, the utility has taken a tried-and-true page out of Ameren's book. PPL boasts a friendly and diverse regulatory environment across three states and the United Kingdom, and its 4.7% yield is above average for utilities dividend stocks. 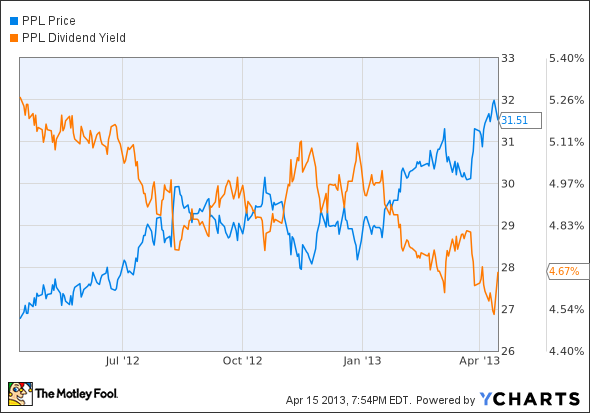 Reeling in rates
Great Plains Energy (GXP) shares are up 18.3% in the past year, a sign that something's going right for this Missouri/Kansas utility company. Fiscal 2013 EPS bumped up 8%, but the real gains came from regulation risk reduction. After filing for rate increases in early 2012, Great Plains got the green light from regulators to boost its 2013 prices. On the unregulated front, the utility generates 83% of its electricity from coal and 14% from nuclear power, a (recently revealed) welcome relief from natural gas' rapidly rising prices. 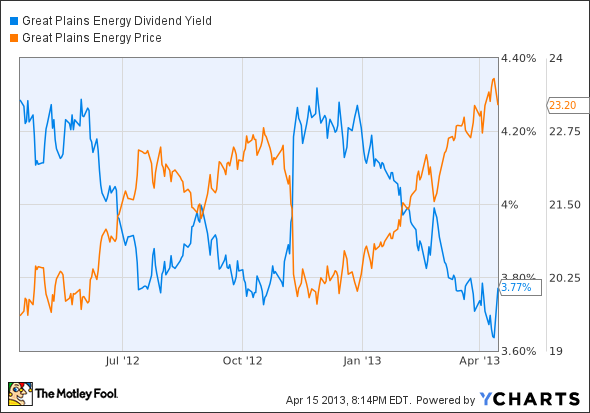 It's not all good
If you need proof that the previous stocks' gains are more than a sectorwide soar, look no further than Atlantic Power (AT). The utility's shares are down 66% in the past year, with the biggest dip coming after a double-whammy dividend haircut and dismal quarter. The company officially transitioned to its new 66% reduced dividend this week, bringing its current yield to 9%. Although this certainly seems high, it speaks more to the utility's slumping price than a dividend stock grab. 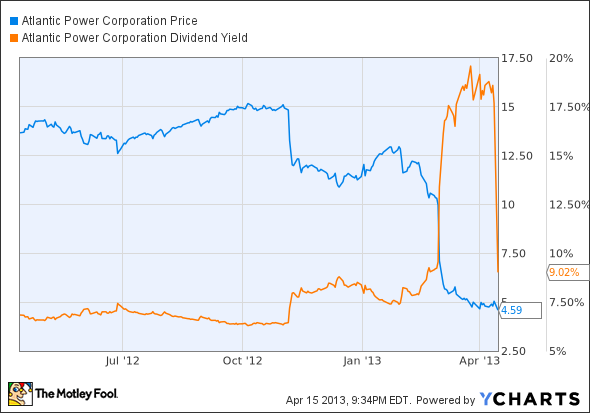 Source: AT data by YCharts.

Here today, gone tomorrow?
Like most other economically tied investments, utility stocks have risen significantly over the past few years. But what separates these stock market winners from others is their stability. Each company is working hard to reduce risk, heading for regulatory waters in lieu of competitive chaos. If these dividend stocks continue to churn out payouts and profits as markets remain volatile, there could be plenty of upside in the years ahead.