Alcoa (NYSE:AA), a member of the Dow Jones Industrial Average, is supposed to be a key indicator of economic growth. That's why its earnings report is usually one of the most highly anticipated reports each quarter. Though, it certainly doesn't hurt that it's typically one of the first companies to report. 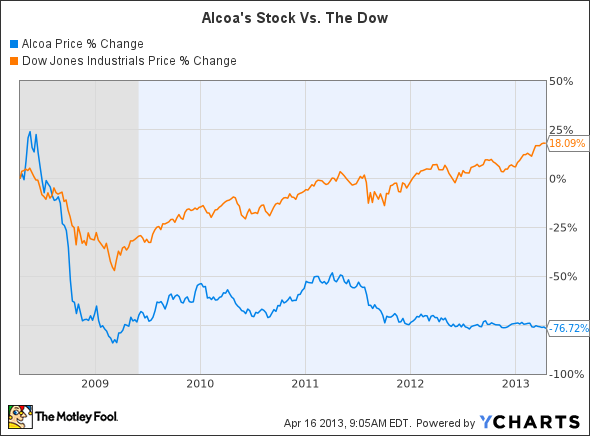 Aluminum in general, and Alcoa specifically, appears no longer to be the key economic indicator that it once was. Even with a fairly positive outlook for aluminum, Alcoa just isn't producing much in terms of real returns for investors. That begs the question: Should this stock even be in the Dow these days?

It would make more sense, in my opinion, to have a more diversified miner added to the Dow Jones. In fact, I think the easy choice here is to go with Freeport McMoRan (NYSE:FCX). It's the second-largest copper producer in the world; given the outlook for copper, it's a much better metal to gauge economic growth. In addition to copper, the company mines gold and molybdenum, which is an important metal used in steel production.

While it has diversity among metals, the company is also in the final stages of adding even more diversity among commodities. It has pending deals to acquire both McMoRan Exploration (NYSE: MMR) and Plains Exploration and Production (NYSE: PXP). When the deals close, Freeport will shift its revenue mix from 100% mining related to around 75% mining and 25% oil and gas. That makes the company a truly diversified economic indicator as copper, oil, and natural gas are much more important to our economy than aluminum.

I will say that over the past year Freeport's performance hasn't been all that great. In fact, its stock has actually underperformed Alcoa's stock by about 2%. However, I think its future is much brighter as it diversifies its revenue with oil and gas. Further, it has several important copper projects coming on line at a time when its tough to bring on new copper production.

In my opinion, the overall commodity diversity offered by Freeport is a better economic indicator than aluminum will be in the future. However, I'll stop short of calling for Alcoa's stock to be dropped from the Dow. Instead, you might want to consider dropping its stock from your portfolio in favor of Freeport's.