With Microsoft set to release earnings on Thursday, it is time to get prepped.

Microsoft (MSFT -0.23%) is scheduled to release earnings results on Thursday, and the apparent sentiment among analysts has been negative. Since the beginning of the quarter, the consensus estimate has fallen by $0.10, with full-year numbers dropping by $0.12. This is not surprising given all of the ink spilled in the blogosphere bashing Windows 8, questioning the Surface tablets, and lamenting the death of the PC. Even in the face of this barrage, the stock has held up pretty well, rising with the overall market by roughly 8%. 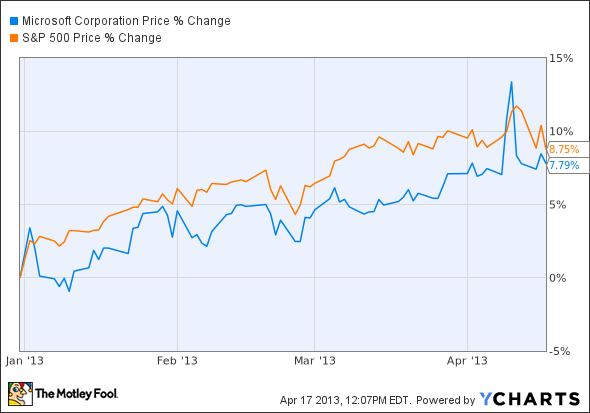 Ahead of the company's official release, the trick is figuring out not only what to expect, but also what numbers are most critical to when the company reports. Placing all of these figures into the proper context, not only historically, but when looking ahead, is what can give you an edge. Ultimately, while the bottom line figure may be far from spectacular, I am expecting some granularity that will hold the promise of a positive trajectory.

The PC market
The big black eye that is inescapable for any company associated with the PC business is the precipitous fall in sales that have been seen over the most recent quarter. IDC had expected a 7.7% contraction in PC sales but reported a 14% decline to 76.3 million units. While Gartner's reported decline was less severe -- a fall of 11% -- the overarching message is that fewer PCs are moving.

Another confirmation of this trend came earlier this week, when Intel (INTC -0.86%) released its own earnings. While the company's numbers were in line with expectations, they showed a 6% decline from PC sales. Investors should be prepared to see a similar decline in revenues from this dip on Thursday.

A possible offset to lower PC sales is the that Microsoft has had more time to transition customers to Office 365. While the product carries a lower initial cash outlay -- meaning that sales from Office could see a short-term dip -- the recurring income it generates is a positive over time. Particularly as Microsoft becomes an increasingly important player in cloud computing, the success of the company's cloud-based productivity suite is critical, especially as the company scrambles to insulate itself from a shift to Google (GOOGL -1.34%) Apps by large numbers of people.

Smartphones and tablets
While Microsoft has received varied reviews of its Surface tablet, getting a product on shelves was an important step. This is not likely to be a huge number for the company, but any clarity that you get will serve as an important baseline looking ahead. As the company must compete not only with Apple's (AAPL 0.17%) market leading iPads but also with the growing base of Android tablets, establishing itself as an option is critical.

A last key number to look for is some direction on Windows Phone sales from its partnership with Nokia (NOK 0.62%). Recent indications from the smartphone maker suggest that various Lumia models are getting solid traction, particularly in China with the Lumia 920T. This is a critical market for Apple, Google, and Microsoft, so the increasing market share for WP is important. This may be even truer as rumors continue to mount that Apple will begin to attack with a lower-priced iPhone.

Ultimately, Microsoft seems to be fighting its way back from the brink of irrelevance. While the company's enterprise business was never in real jeopardy, as the company dives into more markets with competitive products its future looks solid. While I may not wish to jump into the stock ahead of earnings, any weakness as a result of the release is a buying opportunity.