The year's best performers, just in time for earnings season.

Kinder Morgan reports after the market closes today, which means earnings season for midstream investors is officially here. Before we begin to hear feedback about projects, operations, and the sting of natural gas liquids prices, let's take a look at the 10 top-performing stocks in the midstream industry so far this year.

Stocks that rock
Based on price, here are the 10 top midstream stocks year to date:

Just as a reminder, the S&P has had a great year, but that's nothing compared to the cream of this crop: 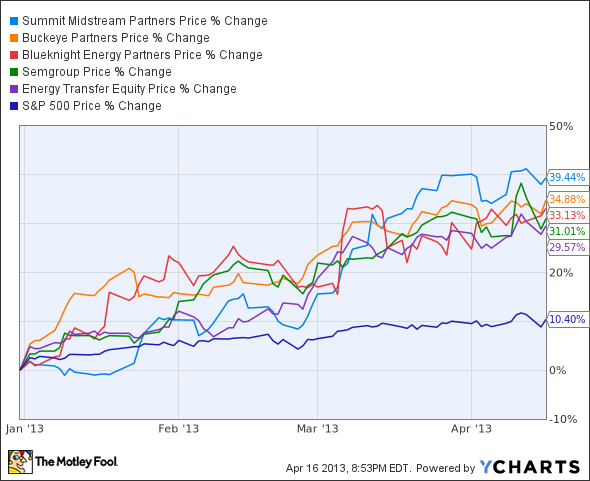 Summit Midstream is a tiny operation focused on U.S. shale plays. What it lacks in size it is quickly making up for in growth -- and not just with its share price. Fourth-quarter EBITDA was up 44% year over year.

We won't cover all 10 of these companies today, but let's take a look at a few of the more intriguing stories from our list.

It's been tough enough to beat the midstream industry this year, and many of these companies looked poised for success in the near future as well. Fellow Fool Matt DiLallo just penned his recommendation for Buckeye Partners, riding to success on the strength of its BORCO terminal in the Caribbean and opportunities here in the U.S.

I wrote about NuStar earlier this year when the stock dropped 7% on a Credit Suisse downgrade. The market only cared about that for about a day, as the company promptly rebounded and is up over 8% since that time. Nothing has changed fundamentally since the downgrade, which was based on fears of a distribution cut. You can read more about that here.

Martin Midstream is a company I've had my eye on recently, given its 7.9% yield and its ability to float under the radar -- at least for now. The partnership actually had a terrible 2012, dropping close to 10%, so 2013 has been refreshing for shareholders. Martin is working on turning around its marine transportation services business segment, and management has high expectations for its terminals and storage segment. Investors should watch closely when Martin Midstream Partners reports on April 29.

Sunoco Logistics Partners is an MLP that many Fools have gotten to know better over the past year, particularly those that hold units of Energy Transfer Partners (NYSE: ETP). Energy Transfer picked up a significant stake in SXL when it acquired Sunoco last year, including 32.4% of SXL's limited partner units, as well as its general partner stake and incentive distribution rights. Sunoco Logistics has a strong presence in the Northeast, but it is the partnership's pipeline in West Texas that has investor's attention lately. SXL is reversing the flow of its Permian Express pipeline to carry crude from the Permian Basin out to Houston. It is slated to begin delivering 90,000 barrels per day sometime in the second quarter of this year.

Foolish takeaway
Past performance is never a guarantee for future gains, but lists like this give us the opportunity to take a closer look at what winners are doing, so that we may continue to grow our understanding of a particular industry.