Hedge fund celebrity David Einhorn recently made a bold comparison of Apple and Amazon regarding lifetime profitability. Does his claim hold up?

A couple months ago when hedge fund celebrity David Einhorn was making a media blitz to sell his "iPref" idea to Apple (AAPL 0.17%), he made an interesting comparison to Amazon.com (AMZN 0.25%). He noted that Apple had generated over $20 billion in operating cash flow in the fourth quarter, which was "more money than Amazon has made in its entire life."

The fund manager also noted that both companies had similar price-to-sales multiples at the time. Apple has declined further since then and its P/S is currently 2.3, while Amazon trades at two times sales. Their earnings multiples are quite a different story, though, as Amazon has been reinvesting heavily in its infrastructure in recent years. Amazon posted a net loss of $39 million last year, rendering its P/E meaningless. The companies are two of the most dominant tech giants today and shape our digital lives, and are increasingly competing on numerous fronts.

I decided to go back and see if Einhorn's initial claim held up. Jeff Bezos founded Amazon in 1994, and the company went public in 1997. What started off as primarily a bookselling website has since transformed over the past two decades into the largest e-commerce platform in the world.

Like most young businesses, Amazon posted net losses for many years and wouldn't generate black ink until 2003 -- nine years after being incorporated. Net income would soar over the next few years until declining since 2010 amid aforementioned infrastructure investments.

Adding up Amazon's lifetime earnings as a cumulative figure, it doesn't even compare to Apple's profits in its most recent single quarter. Not even close. 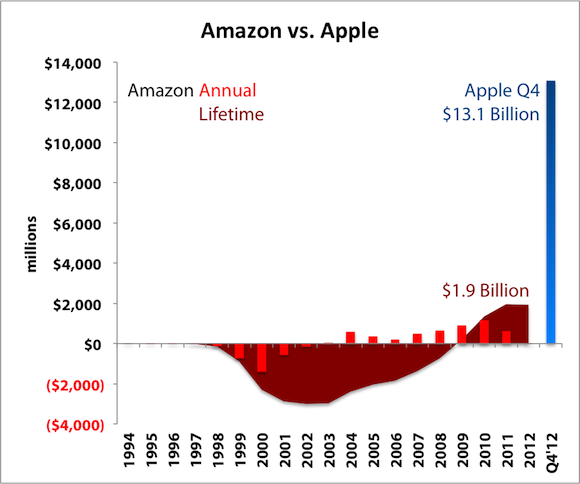 Amazon's lifetime earnings have been $1.9 billion (which is also the amount of its retained earnings currently on the balance sheet), and only recently in 2009 did the company recoup its prior losses. Last quarter, Apple's net income was $13.1 billion, or nearly seven times Amazon's lifetime total.

Einhorn was seemingly referring to Apple's operating cash flow (which was higher than net income at $23.4 billion), but even just using the bottom line, it's clear Apple blows Amazon's lifetime earnings out of the water.