Please ensure Javascript is enabled for purposes of website accessibility
Log In Help Join The Motley Fool
Free Article Join Over 1 Million Premium Members And Get More In-Depth Stock Guidance and Research
By Adam Levine-Weinberg - Apr 18, 2013 at 12:00AM

Amazon stock has been on a tear for the past few years as investors have come to appreciate the company's long-term potential. However, the stock's valuation now seems to imply unrealistic future revenue growth.

Amazon.com (AMZN 3.66%) is undoubtedly a leader in the global e-commerce revolution. For many years, the Amazon stock price did not reflect the full disruptive potential of the company's business model. However, over the past several years, the pendulum has swung in the other direction. 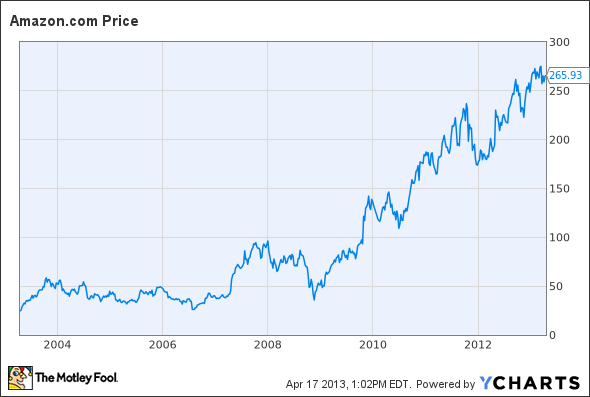 For Amazon stock to continue to perform well, the company will need to grow rapidly for many years to come. Unfortunately for Amazon shareholders, revenue growth has already begun to trail off. The company's management also projected a further slowdown in the first quarter (final results will be reported next week). Thus far, Mr. Market has shrugged off the risks inherent in Amazon stock, sending it ever higher. However, if revenue growth remains on its current downward trajectory, investors will eventually connect the dots. When that happens, the stock could see a substantial downward correction.

Big risk factors
Amazon got its start in books, and its success in that category drove Borders out of business, while leaving Barnes & Noble on life support. Books (and other media) are a great business for e-commerce, because there are so many different titles that it is essentially impossible to carry a comprehensive selection in a retail store. However, Amazon's recent growth has been much more heavily focused in the electronics category. Sales of electronics and general merchandise grew 53% in 2011 and 36% in 2012 (holding exchange rates constant); by contrast, media sales grew just 16% and 14% in those two years.

However, Amazon has a much smaller competitive advantage in the electronics market, particularly in the U.S. Competitors like Best Buy and Target have successfully rolled out price-matching campaigns to fight the "showrooming" trend that was causing them to lose sales to Amazon. Furthermore, a number of states have recently forced Amazon to begin collecting sales tax, eliminating what amounted to a long-term cost advantage for Amazon. Moreover, Congress may soon pass a bill that would allow every state to collect sales tax from Amazon and other online retailers.

The impact of increasing competition and the imposition of sales tax in numerous states is already being reflected in the company's results, but Amazon stock has remained immune so far. Amazon's revenue growth rate has declined steadily for the past two years after several years of rapid growth (excluding a blip during the Great Recession): 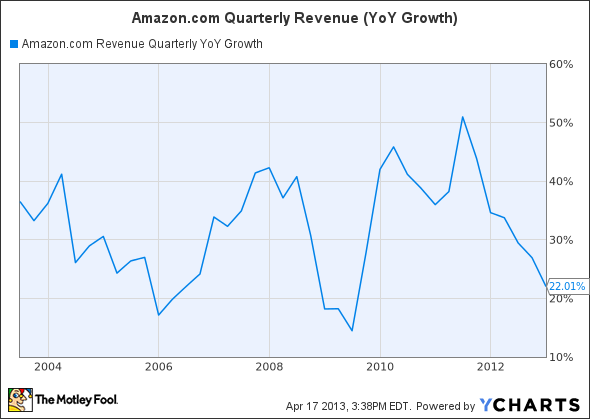 Amazon projected sales to be up 14% to 26% for the first quarter. This is probably a realistic estimate; sales growth of 22% in the fourth quarter fell just below the midpoint of the guidance range. While approximately 20% revenue growth is still impressive, the long-term downtrend is very worrisome. The current Amazon stock price seems expensive unless you believe that the company can grow sales by 20% annually for many more years.

The impact
The argument between bulls and bears often gets hung up on the company's stratospheric earnings multiple. Amazon currently trades at approximately 180 times expected 2013 earnings and 75 times expected 2014 earnings. Bears typically argue that Amazon stock is overvalued based solely on the high P/E. Bulls counter that the company would be earning much more money but for its heavy investments for future growth. Bulls believe that Amazon should be praised for its long-term focus, and that its near-term earnings are nearly irrelevant.

Both sides have a point. Amazon's operating margins will almost certainly bounce back to historical highs around 6% to 7% in a few years, and might even go a little higher. However, even with improved margins, Amazon will still have a very high P/E. If Amazon had achieved a record-high operating margin of 8% last year, and an after-tax margin of 5%, the company would have earned net income of slightly more than $3 billion, or $6.50 per share. Today, Amazon trades for more than 40 times hypothetical earnings from this optimistic margin scenario. The implication is that margin growth alone cannot justify the current Amazon stock price; Amazon also needs revenue growth to rebound (or at least stabilize).

Foolish conclusion
Amazon investors should be wary of the company's slowing revenue growth. I think Mr. Market is underestimating the likelihood that slower revenue growth is here to stay for Amazon. If the company continues to miss expectations for the next quarter or two, investors may be forced to reevaluate Amazon's growth potential. If that happens, Amazon stock could be battered by severe multiple contraction.