Verizon is easily the strongest performer on the Dow today. The stock surged on a strong earnings report, helping several (but not all) sector stocks trend higher as well.

The Dow Jones Industrial Average (^DJI 0.60%) is down 27 points, or 0.19%, shortly after 1 p.m. EDT. But don't blame Verizon Communications (VZ 1.10%) for the slide: The telecom giant's shares have jumped 3.6% on above-average volume, boosting the Dow by 14 points. The first-quarter report, hot off the presses, was strong enough to lift AT&T (T 0.66%) shares into positive territory on a generally downbeat market day.

Verizon's first-quarter sales of $29.4 billion were just a hair below the Street's view, but earnings of $0.68 per share edged out analysts' bottom-line targets by $0.02. Revenue was up 4.2% year over year, earnings jumped 15%, and operating cash flow soared 26% higher. There's plenty of good news to go around.

The outlook for coming quarters is equally rosy. "With ongoing improvements in operating efficiency, we expect continued growth in free cash flow and earnings as we move through the year," said CEO Lowell McAdam.

Ma Bell and several smaller telecom stocks bounced higher on Verizon's positive industry perspective, but the rising tide didn't lift every boat. Apple (AAPL 0.11%) shares are down 2%, because Verizon didn't have a whole lot of positive news for Cupertino.

More specifically, the breakdown between Apple's 4G LTE-sporting iPhone 5 and the older, non-4G iPhones came as a bearish surprise: 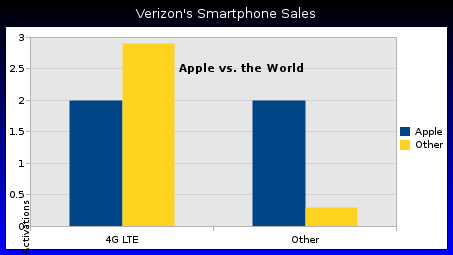 iPhone buyers were split 50-50 between the latest version and older, lower-cost alternatives such as the iPhone 4S. Apple permabull Gene Munster from Piper Jaffray, for one, had expected a 60-40 split, with most buyers preferring the newer and higher-margin device. That's bad news for Apple's average selling prices and could hurt the company's bottom line when its own second-quarter report is released next week.

Verizon's customers seem almost platform-agnostic when picking a 4G-capable smartphone today, but they overwhelmingly favor older iPhones for 3G handsets. Is Apple destined to become the supplier of choice for cost-conscious consumers with low demands on network speeds? If so, Cupertino's industry-leading profit margins will be in for a rude surprise as that trend unfolds. Food for thought.