Verizon is first up among domestic wireless carriers to report results, including its iPhone activation figures. Investors frequently like to extrapolate Big Red's digits, but those projections should be taken with a boulder of salt.

It's that time of year again. Ahead of every Apple (AAPL 4.08%) earnings release, which in this case comes next Tuesday, wireless carriers begin to report figures of their own. That includes iPhone and smartphone activation figures, data points that can hint at what the Mac maker has in store.

The typical method is to extrapolate Apple's total units based on Verizon's historical contribution to total iPhone units -- a method that's at best a rough estimation. Additionally, Verizon's portion of total iPhones fluctuates frequently, which yields a wide range of possibilities. We can look at the numbers, but investors would be wise not to read too deeply into them due to the inherent unpredictability.

Last quarter, Verizon accounted for 13% of total iPhones, implying 30.8 million total iPhones (well below consensus). However, Big Red was only 9% of total units in Q1 2012, implying 44.4 million total iPhones (well above consensus). Comparing to Q1 2012 may be more apt, since there are seasonal similarities as Apple rolls out internationally following launch and fewer sales come domestically. Launch quarters tend to see higher domestic sales, which decline as the iPhone hits more countries. 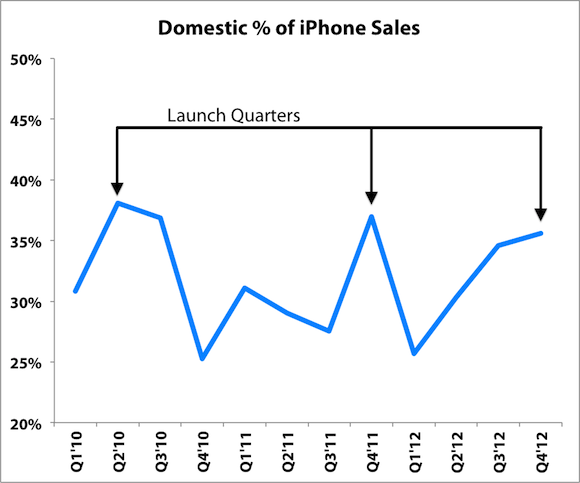 Even if we average Verizon's contribution over the first eight quarters that the carrier has had Apple's flagship device, we get 11%, which implies 36.4 million iPhones (slightly below consensus). For reference, consensus is around 37 million.

That's a pretty wide range of speculation, from 30.8 million to 44.4 million, depending on which figure we use to extrapolate, underscoring the weakness of using this method.

Piper Jaffray's Gene Munster believes the figures are in line with expectations, and is sticking with his estimate of 35.5 million iPhones this quarter. Although he thought the product mix would be closer to 60% iPhone 5 units, so the 50% iPhone 5 units may point to some possible downside in average selling prices.

In my view, older iPhones could actually bode well for gross margins, though, since the iPhone 4 and iPhone 4S share a similar cost curve due to component and design similarities. Those models were released in 2010 and 2011, respectively, and could very well carry higher gross margins at this point as costs have come down dramatically since then.

Furthermore, continued strength in older, smaller iPhones could also be seen as more evidence that the trend toward larger smartphones isn't urgent, since those models carry 3.5-inch displays. With 27% of Verizon's total smartphones being smaller iPhones, maybe the phablet fad is fading. We'll know in just a few days' time.