These stocks just rolled over. Which ones will bounce back?

Here we go again, experiencing dramatic swings in the Dow Jones Industrial Average, which closed down 138 points yesterday nearly wiping out the recovery it had made the day before. The index was shot down largely by Bank of America (BAC 1.57%) missing its earnings estimates, even though it witnessed a 57% surge in deposits from the year-ago period and profits roared ahead to $0.20 a share from $0.03 a share.

While mortgage banking income was down year over year, the greater sin committed was missing analyst profit expectations of $0.22 per share. An argument could be made that perhaps Wall Street was a bit too exuberant in its outlook for the No. 2 banking giant, but it could also be excused for being so, since financials have been the shining star of the markets, with B of A, JPMorgan Chase, and Goldman Sachs, all benefiting from the Fed's pumping $80 billion or so a month into the economy.

Looking at their stocks' performance over the past year, we can see that analysts might have expected Bank of America to continue its meteoric run. 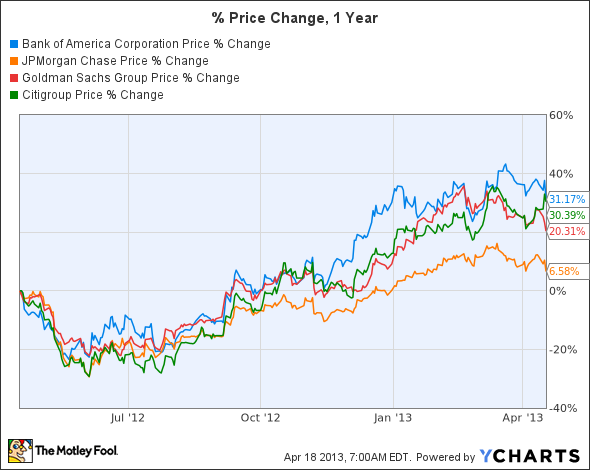 With B of A faltering, Morgan also dropped 3.5%, and Goldman and Citigroup were down 2% or more. Considering the fractured future of the eurozone and the baseless gains made here at home, it may be we're seeing the peak of the financial markets.

A chip so big it's a gouge
Yet even beyond financials, the markets were weak yesterday with more than three-quarters of all stocks listed on major U.S. exchanges declining, in large part on the tremors Apple (AAPL -2.42%) caused. After audio-chip supplier Cirrus Logic (CRUS -2.26%) rocked the i-sphere with news of a glut of chips at the slowdown of an unnamed customer (that everyone knows is Apple, since it accounts for 90% or so of its revenues), analysts immediately speculated that that meant there were likely going to be delays in launching new versions of the iPad and iPad Mini. The speculation sent Apple's stock careening 5.5% lower and Cirrus Logic plunging 15%. Other Apple suppliers were also generally knocked down, with TriQuint Semiconductor and Skyworks Solutions falling 3% and 4%, respectively.

Yet it raises the larger concern that Apple is generally losing its hold on the public's imagination, and perhaps the iPhone specifically may be endangered by the rise of Samsung's Galaxy and other Android smartphones. With Apple's earnings due out next week, investors worry there may be some significant gaps that show up, and they've dropped its stock below $400 a share, the lowest level it's been at since late 2011. That might make its stock absurdly cheap -- along with Cirrus Logic's -- but there's the distinct possibility we'll see them both test newer lows yet.

Thanks, now get out!
Dismissing your auditor for questions it raises about the value of your properties and your reserves doesn't exactly instill confidence among investors. Magnum Hunter Resources (NYSE: MHR) reported it fired PriceWaterhouseCoopers because it started questioning items in its financial statements that could have a material impact on whether investors could trust what the company's reporting.

Management essentially said, "Trust us, we already know about that stuff and are working on it. You don't need more information to review it." They also said they have plenty of money to meet its debt covenant, and its reserves, and its other estimates are accurate, too.

Oh, OK. Investors are supposed to take management's word for it when their auditor raises potential yellow flags and then gets fired for doing so? Maybe there's nothing wrong with Magnum's numbers, but why wouldn't you work amicably with your auditor instead of giving them the boot? The stock might have fallen 15% yesterday, actually having recovered from the worst of the news when it lost nearly 30% of its value, but I have to question why investors would hang around anyway, and I expect we'll see it drop further.

Fool contributor Rich Duprey has no position in any stocks mentioned. The Motley Fool recommends Apple and Goldman Sachs. The Motley Fool owns shares of Apple, Bank of America, Cirrus Logic, Citigroup, JPMorgan Chase, and TriQuint Semiconductor. Try any of our Foolish newsletter services free for 30 days. We Fools may not all hold the same opinions, but we all believe that considering a diverse range of insights makes us better investors. The Motley Fool has a disclosure policy.