It's been a while since Cupertino has put out a game-changing gadget.

Without fail, there's one task that you can regularly do that will help you improve your decision-making in investing and life: Keep a journal of your decisions. When it comes to investing, that means writing down exactly why you're buying certain stocks, and exactly what would have to happen to consider selling.

Reasons for buying
I like to follow the KISS rule for investing: Keep It Simple, Stupid! There's so much information out there that unless I keep my investing simple and focused, analysis paralysis is unavoidable. So here were my four reasons for buying.

1. Apple produces gadgets that are incredibly user-friendly and useful.
There's no doubt that when the iPod came out, the simple concept of "hundreds of songs right in your pocket" was easy enough -- and true -- to make the product a hit. Since then, the iPad, iPhone, and newer iterations of laptops (one of which I'm typing this on) have followed suit.

At the same time, however, rivals have gained ground. Though I don't have a smartphone (I'm truly old-school, with a flip-phone), I know that many of my friends have Samsung phones that run on Google's Android operating system. These phones are just as easy to use. So while Apple certainly hasn't taken a step back, the competition is certainly closer than it was three years ago.

2. Apple has enormous potential to expand abroad, especially with smartphones
This has really played out over the past three years. Sales in the Asia-Pacific region have exploded, growing over 300% between 2010 and 2012, and it now accounts for a much larger percentage of Apple's sales. 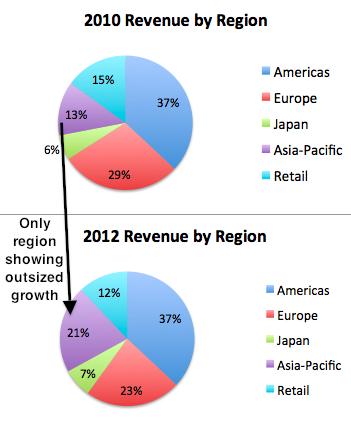 This is a point I will be paying especially close attention to in next week's earnings, as sales in Apple's "Greater China" segment increased by 67% last quarter, but the rest of the Asia-Pacific grew at a much more tepid 10%.

3. Apple's potential is underappreciated by the market, especially because of its large market cap.
I don't think this is as much of an issue anymore. Back when this purchase was made, Apple's growth was difficult to believe, and it traded with a market cap of about $235 billion. Since then, it's been valued at as much as $660 billion, making it -- for a short while -- the most valuable company in the world. I don't think market cap alone is what's holding Apple's stock back right now.

4. Apple's past leads me to believe they will continue to innovate game-changing products
This is where the crux of everything hinges. In my "reasons that would make me consider selling" section of my notes, I very clearly wrote two things:

From the standpoint of an everyday Joe who is not a techy, both of these concerns give me pause. Sure, Siri is cool and the Retina display is impressive, but since the iPad came out, I haven't seen a ton of serious innovation.

There have been rumors, and Tim Cook has been promising us great products in the pipeline, but the proof is in the pudding, and I personally haven't seen anything.

As more and more time goes by, I've become convinced that the competitive advantage Apple had was Steve Jobs and, essentially, nothing more. At the same time, I know that he did everything possible to make innovation part of the DNA of the company, even creating Apple University.

Where does that leave me?
One thing is for sure, at today's price, Apple looks like quite a deal. Take a look at the metrics for the company when I decided to buy in and today.

By almost any metric measurable, Apple is very cheaply priced. I'm certainly not buying more shares right now, as my concerns about Jobs being the true differentiator are still very much there. However, because shares are trading for so low, and because I vowed to hold shares for three years in my retirement portfolio, I won't be selling any either.