Ahead of an announced increase due in July 2013, diversified energy company ONEOK (OKE 2.21%) announced yesterday that it will be paying a quarterly dividend of $0.36 per share on May 15 to shareholders of record at the close of business April 30. The dividend remains unchanged from the previous quarter.

In February, ONEOK announced it expects to increase its dividend by $0.02 per share in July with it growing by approximately 55% to 65% between 2012 and 2015. It also affirmed a long-term dividend target payout of 60% to 70% of recurring earnings, all subject, of course, to its board of directors' approval.

Since January 2006, ONEOK has increased its dividend 15 times, representing a 157% increase during that period. The just-announced payout equates to a $1.44-per-share annual dividend yielding 2.9%. 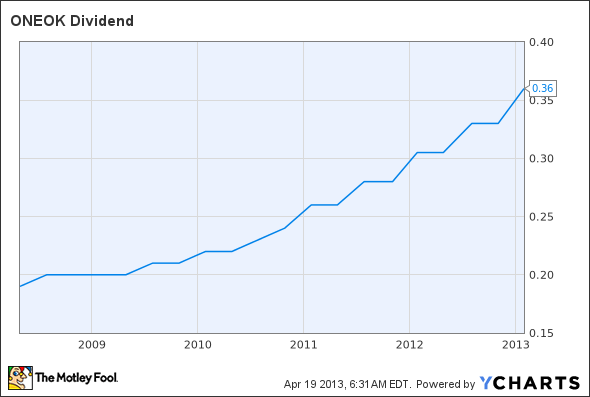 OKE Dividend data by YCharts. This chart does not include the current dividend announcement.