Learning from the market's past to understand its present.

On this day in economic and business history...

Integrated circuits will lead to such wonders as home computers, or at least terminals connected to a central computer, automatic controls for automobiles, and personal portable communications equipment. The electronic wristwatch needs only a display to be feasible today. ...

Reduced cost is one of the big attractions of integrated electronics, and the cost advantage continues to increase as the technology evolves. ... There is a minimum cost at any given time in the evolution of the technology. At present, it is reached when 50 components [transistors] are used per circuit. But the minimum is rising rapidly while the entire cost curve is falling. If we look ahead five years, a plot of costs suggests that the minimum cost per component might be expected in circuits with about 1,000 components per circuit. ... In 1970, the manufacturing cost per component can be expected to be only a tenth of the present cost.

The complexity for minimum component costs has increased at a rate of roughly a factor of two per year. Certainly over the short term this rate can be expected to continue, if not to increase. Over the longer term, the rate of increase is a bit more uncertain, although there is no reason to believe it will not remain nearly constant for at least 10 years. That means by 1975, the number of components per integrated circuit for minimum cost will be 65,000. 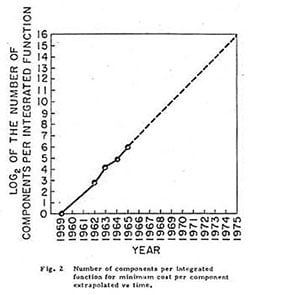 I believe that such a large circuit can be built on a single wafer.

The principles first enumerated here now form the basis of Moore's Law, the fundamental underpinning of computer hardware progression that projects a doubling of transistors per integrated circuit every two years -- often interpreted as a doubling of computing capabilities every two years. Moore's 1965 paper actually projects a doubling every year, but in a speech given a decade later, Moore revised his projections to the current two-year estimate.

At the time, Fairchild was pioneering low-cost semiconductor manufacturing and was quickly moving toward leadership in a small and turbulent industry. The company had secured a prestige placement in the Apollo Guidance Computer, which would debut the following year -- and which was alluded to in Moore's paper: "Such programs as Apollo, for manned moon flight, have demonstrated the reliability of integrated electronics." However, it would not maintain its leadership for long, nor would Moore stick with the company he helped create. In 1968, Moore and fellow Fairchild alumnus Robert Noyce founded Intel (INTC -1.22%), the company now most closely associated with transistors, integrated circuits, and Moore's Law.

Three years after Intel's founding, the company unveiled its first true microprocessor, the Intel 4004. This chip had 2,300 transistors and thus kept a rough pace with Moore's ambitious projections. The company proved adept at upholding Moore's Law all the way through the '90s and well beyond, and it became an industry byword for the level of advancement we now take for granted: 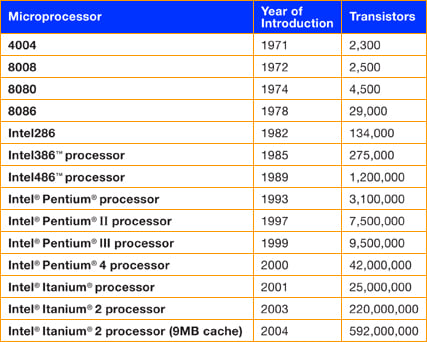 Moore proved to be as adept an executive as he was a technologist. He became Intel's CEO in 1979 and held that position until 1987, by which point it was clear that the computing revolution would be powered primarily by Intel chips. This was due in no small part to IBM's (IBM -0.14%) choice of the Intel 8088 for its first PC and Microsoft's (MSFT -1.09%) decision to develop its operating system -- first DOS, then Windows -- around Intel chip architectures.

The declining cost of a transistor and the simultaneous explosion of computing power led to a radical transformation of global industry that continues to this day. In 1965, the computing world was only one year removed from IBM's launch of the System/360 line of mainframes that marked a shift toward widespread business acceptance. IBM, as market leader in a relatively tiny computing industry, posted $3.75 billion in revenue that year. Not one of the 30 components of the Dow Jones Industrial Average (^DJI -0.44%) of 1965 could be considered "tech" companies -- IBM itself would not rejoin the index until 1979.

Four decades after Moore first published his ideas, the PC industry alone generated $300 billion in annual sales, and more than 900 million PCs were used around the world. When software, services, connectivity, and other assorted information technology support industries are added in, the global information technology industry supported by Moore's Law was worth approximately $3 trillion. Four of the Dow's components -- Microsoft, IBM, and Intel among them -- were directly responsible for global PC adoption, and the other 26 components had all benefited enormously from efficiency gains wrought by computing in the workplace. Later, the Dow added a fifth "tech" component, further shifting its original industrial focus toward the new technology economy.

The images used here come from an Intel press kit released to celebrate the 40th anniversary of Moore's original paper. The company also provided several fascinating facts about the progress of chip-making over those four decades (keep in mind that these were current in 2005 and have since been surpassed):

Moore's Law won't work forever, but by the time it breaks, the world's most advanced chip-makers may be well on their way toward a completely new computing paradigm. In the meantime, this nearly 50-year-old proposal has proven remarkably durable and has become a simple and straightforward explanation for the explosion of computing power that marches forward, year after year.

Fool contributor Alex Planes owns shares of Intel. Add him on Google+ or follow him on Twitter @TMFBiggles for more insight into markets, history, and technology.

The Motley Fool recommends Intel. The Motley Fool owns shares of Intel, International Business Machines., and Microsoft. We Fools may not all hold the same opinions, but we all believe that considering a diverse range of insights makes us better investors. The Motley Fool has a disclosure policy.