Please ensure Javascript is enabled for purposes of website accessibility
Log In Help Join The Motley Fool
Free Article Join Over 1 Million Premium Members And Get More In-Depth Stock Guidance and Research
By Tyler Crowe - Apr 20, 2013 at 8:49AM

Alternative energy investors may be finally getting what they have been waiting for.

Proponents of alternative energy such as solar and wind power have fought a long uphill battle. For years they've tried to prove that these energy solutions were not only more ecologically friendly, but also that the potential, long-term returns made them a better investment. Well, it appears as though this year might finally be when average investors stand up and see that investing in alternative energy companies is not the wild roller-coaster ride it once was.

Let's look at the most recent developments in the space and see how alternative energy might lose the "alternative" moniker.

Solar: Efficiency is the name of the game
The biggest gripe with alternative energy, notably solar, is that it can't compare with fossil fuels because the per-watt costs were too high. Thanks to developments in the technology, this is becoming less and less the case. According to a report in The Economist, the average cost for a solar installation per watt produced has dropped 99.14% since 1977 and is now about $0.74 per watt produced. When considering additional installation costs, an average solar facility will run about $4.00 per watt, which is pretty reasonable when compared with the $3.00 per watt needed to build a coal-fired facility.

One example of improving efficiency from solar is First Solar's (FSLR -2.23%) Macho Spring facility in New Mexico. The 50-megawatt solar farm will sell power to El Paso Electric (EE) for 5.79 cents a kilowatt-hour, less than half of what El Paso pays to buy power from coal plants. A large uptick in manufacturing has also helped First Solar start to realize even further cost reductions. Today, the company sports one of the lowest per-watt costs at about $0.66 today, and the cost is expected to lower by another 33% in four years.

Can alternative energy find its second wind?
In terms of new installations, 2012 was the best year ever for wind. More than 13 gigawatts of wind generation were added last year, a 28% increase. Globally, wind generation capacity has doubled every three years. If we stay at this pace, wind could surpass nuclear generation within a decade.

So far in the U.S., development of wind projects has been helped by the Production Tax Credit to encourage alternative energy generation. It was set to expire at the end of 2012 (hence the large jump in 2012 installations), but it was extended throughout 2013. The uncertainty of this tax credit will hurt wind energy growth, but the industry is starting to stand on its own as well. According to Bloomberg New Energy Finance, electricity prices from wind have dropped 21% since 2010. Although wind projects are supposed to slump in 2013 -- only 6% growth -- it's expected to see a 14% jump in 2014. 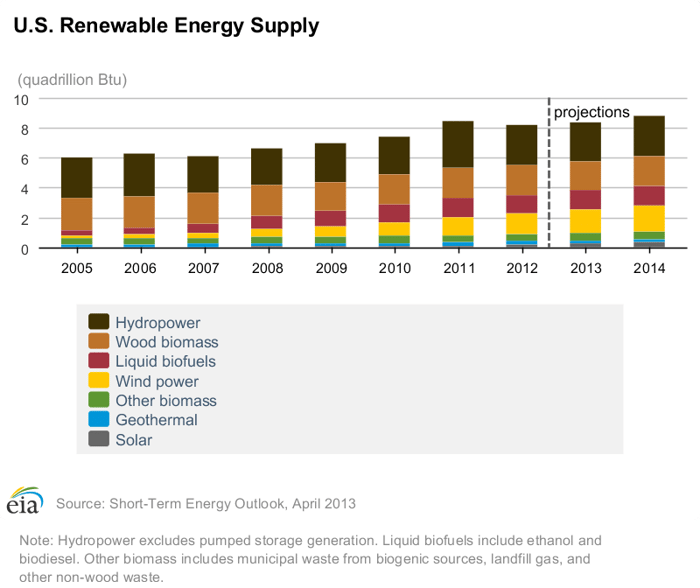 The proof is in the projections
It's pretty clear that solar and wind energy are a small part of the energy profile in the U.S., but they are growing. In 2012, we saw a backpedaling on total renewable energy consumed, but a large part of that move was from less hydro power more than anything else. Last year was one of the largest growth years for the wind sector, mostly pushed along from fears that the wind production tax credits were going to expire. Today, wind represents 6% of all generated power in the United States. Solar is still a minor player in the big picture, but it is expected to double in the next two years.

Several companies are betting that much of that solar growth will come from distributed, or on-site, generation. NRG Energy (NRG -0.80%) and Solar City (SCTY.DL) are making a big push to provide individual homes and commercial spaces with solar generation equipment and power-purchase agreements to buy back electricity in times of excess generation. While it may not be an immediate threat, it could disrupt the traditional utility space in the future.

What a Fool believes
The energy space is all about perspective. While the signals are very promising for the alternative energy space, it still has a long way to go before it's in the same conversation as the big three of oil, coal, and natural gas. Also, with global demand for energy expected to skyrocket, each form of energy will have its own niche. Investors in the energy space should consider taking an "all of the above" approach, because it doesn't appear that any form of energy will be dying soon.