Insiders sell $26 million worth of shares.

Reflecting fear of terrorism and concerns that the global economy may be slowing, the S&P 500 (^GSPC 2.47%) and the narrower, price-weighted Dow Jones Industrial Average (^DJI 1.76%) both fell 2.1% this week -- stocks' worst performance since November,

Chief Financial Officer Gary Fayard made the largest sale -- his first transaction on record -- exercising options to buy 224,000 shares that were set to expire no earlier than this coming December and selling the shares at an average price of $41. Coca-Cola's stock closed at $42.66 on Friday, up 1.3% on the day. Fayard continues to own 188,944 shares directly and 356,597 shares through his spouse and multiple trusts.

Are the shares now overvalued? As of Friday's close, they were valued at 26.7 times the trailing 12 months' normalized earnings-per-share. The last time they traded at a higher multiple was during the second quarter of 2008; here's how the shares have performed relative to the S&P 500 since then: 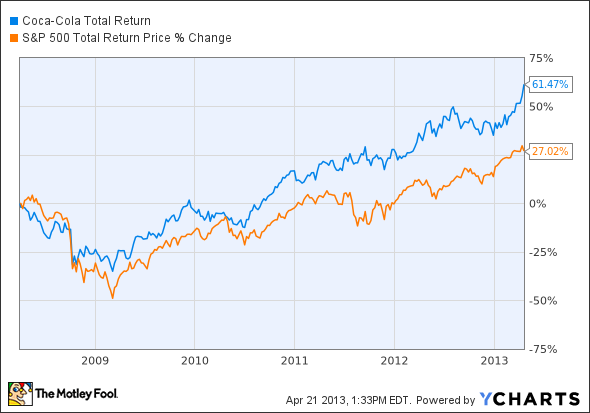 The shares have smashed the index! Even on an absolute basis, they have handed shareholders a tidy return. If that performance is anything to go by, the shares can't have been significantly overvalued at the beginning of that period. (In fact, the average price-to-earnings multiple was higher than the current figure in every quarter from 1991 through September 2004, although, naturally, growth prospects were different then than they are now.)

While the recent insider sales are no cause for alarm, as the valuation inches up, Coca-Cola investors ought to be dialling down their return expectations. The shares -- along with those of other high-quality franchises -- have had a good run over the past several years. The odds that they will reproduce that performance over the next several years are decreasing.