There have been numerous rumors over the past week that Apple (NASDAQ:AAPL) and Yahoo! (NASDAQ: YHOO) are thinking about taking their relationship to the next level. Both The Wall Street Journal and Bloomberg have chimed in with reports to that effect.

Here's the thing: This could be a beautiful marriage.

As it turns out, Apple and Yahoo! both happen to be heading toward the same destination. Apple needs to bolster integration with third-party data sources and cloud services, while Yahoo! is trying to regain relevance in the mobile era. Meanwhile, they share a mutual enemy in Google (NASDAQ:GOOGL).

By fetching data from Yahoo! on the back end for numerous services beyond the current partnership (primarily stocks and weather), Apple could further snub Google. If Yahoo! can score some prominent screen real estate on iOS devices, that gives the company a renewed sense of mobile relevance.

Even beyond the high-level strategic implications, there's another important department where Apple's and Yahoo!'s interests converge: design.

Design matters
Apple's iOS interface is aging, and many users (including myself) have been calling for a revamp. This may already be en route, with design guru Jony Ive now directing interface at Apple and the Mac maker's Worldwide Developer Conference, or WWDC, coming up in June. WWDC is typically when Apple shows off the newest versions of iOS to developers and the world, and iOS 7 could be the most important upgrade in years, as it's expected to feature an aesthetic overhaul.

Ever since becoming Yahoo! CEO, Marissa Mayer has put a heavy focus on Yahoo!'s core products, revamping the home page and acquiring a handful of mobile startups. The company has also recently released new mobile apps for email and weather -- and they're shockingly attractive.

Both feature minimalist modern designs with typographical accents, an aesthetic philosophy more characteristic of Google and Microsoft these days. In fact, simply comparing Yahoo! Mail and Gmail on iOS show that Mayer may be nudging her company's design approach in the same direction as her former employer's, and that's a good thing. 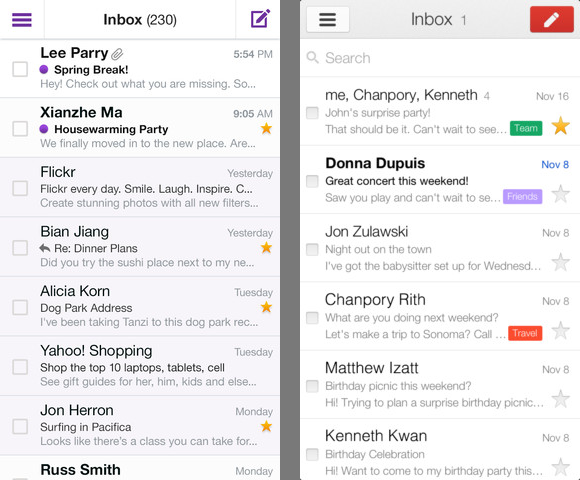 The Yahoo! Weather app that was just released is also clean and striking. The app pulls relevant location images from Yahoo!'s Flickr service and accomplishes a similar effect to what Microsoft's Bing home page does, which is known for its beautiful imagery. Yahoo! Weather also makes heavy use of intuitive gestures that have become accepted conventions.

This is all coming from a company that investors mostly (and justifiably) disregarded a year ago as having missed out on mobile, yet Mayer's focus on product design is earning the company a shot at mobile redemption. The bottom line now takes a back seat to products, which is the right long-term call for Yahoo!'s turnaround.

I've already replaced the standard weather app on my iPhone with Yahoo!'s new mobile meteorologist. Yahoo! provides the back-end data to the iPhone's default Weather app, so the information itself is more or less the same. Yahoo!'s is just much easier on the eyes.

On the other hand, it's not as if Apple is prepared to outsource design of its first-party apps, many of which are still mostly in their original forms. Apple doesn't have a particularly good track record with updating its first-party apps, but hopefully that will now change with its shift toward greater interdepartmental collaboration. Ive and Mayer were recently spotted bumping elbows at an all-star pizza party of Silicon Valley's elite. Perhaps they discussed minimalist typography.

Ive's iOS is due out in a matter of months, and if Apple takes any cues from the design direction that Mayer is pursuing with Yahoo!'s offerings or integrates some of the search company's services, Apple and Yahoo! could give Google some serious competition in the design department.