Let's see what the numbers say about Western Digital.

Investors love stocks that consistently beat the Street without getting ahead of their fundamentals and risking a meltdown. The best stocks offer sustainable market-beating gains, with robust and improving financial metrics that support strong price growth. Does Western Digital (WDC 0.15%) fit the bill? Let's take a look at what its recent results tell us about its potential for future gains.

What we're looking for
The graphs you're about to see tell Western Digital's story, and we'll be grading the quality of that story in several ways:

What the numbers tell you
Now, let's take a look at Western Digital's key statistics: 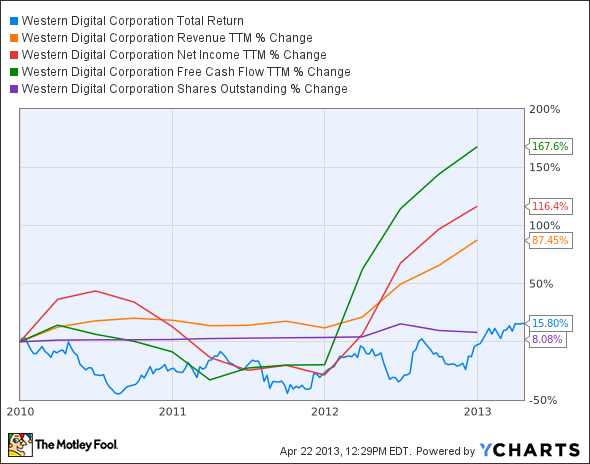 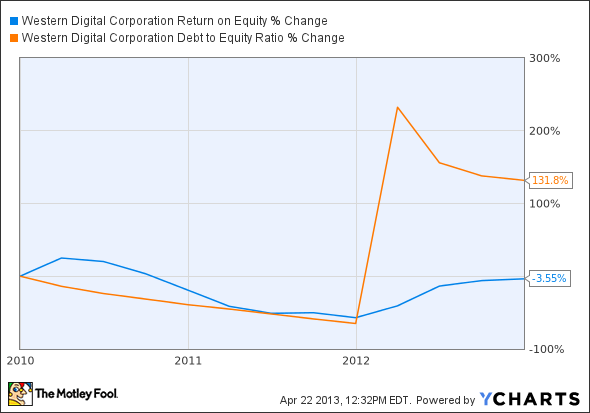 How we got here and where we're going
Six out of nine passing grades is a pretty solid showing for one of the two big hard-drive makers left standing after the wave of industry consolidation that took place several years ago. However, it's not quite as good as what chief competitor Seagate Technology (STX) managed last year on the same analysis, when it pulled off a very rare perfect score. Does that mean Seagate is indisputably better than Western Digital, or can Western Digital overcome a few minor weaknesses to regain ground? It shouldn't be too hard to pay down debt and resume profit growth now that major supply chain problems are a thing of the past.

Here's one simple fact to consider: Western Digital is definitely one of the cheapest stocks on the market right now. Seagate is even cheaper, but with both dawdling at a mid-single-digit P/E ratios, investors can easily imagine a sizable upside if only valuations return to long-term averages. But why are hard-drive makers so cheap? Well, it can be hard to justify optimism over a component primarily used by a dying industry. With PC sales showing their worst performance in decades, it's worth considering the possibility that real growth is over. After all, Intel (INTC -0.31%) relies on the same basic sectors as Western Digital -- PCs primarily, and server manufacturers as a backup -- and the company's earnings have not been particularly strong. Intel is the hardware sector's bellwether, and if it can't overcome PC weakness, the long-term prospects for hard-drive makers may be similarly dim.

Despite that weakness, Fool analyst Jim Mueller thought that Western Digital was in a better position than Seagate, and was worth buying in February. A server may only need one processor, but data use continues to explode, and each hard drive can only store so much. Every social-media status shared, photo uploaded, video played, and multiplayer game enjoyed online has to store its data somewhere. Western Digital got Jim's nod for a stronger financial picture than what he saw at Seagate, but both companies are liable to succeed if the cloud-storage trend outpaces the need for cloud servers themselves. Another driver of Western Digital's future outperformance might be helium-enhanced hard drives, which appear to boast better power consumption and higher capacity than existing drives.

Putting the pieces together
Today, Western Digital has some of the qualities that make up a great stock, but no stock is truly perfect. Digging deeper can help you uncover the answers you need to make a great buy -- or to stay away from a stock that's going nowhere.