Every investor can appreciate a stock that consistently beats the Street without getting ahead of its fundamentals and risking a meltdown. The best stocks offer sustainable market-beating gains, with improving financial metrics that support strong price growth. Let's take a look at what Seagate Technology's (NASDAQ:STX) recent results tell us about its potential for future gains.

What the numbers tell you
The graphs you're about to see tell Seagate's story, and we'll be grading the quality of that story in several ways.

Growth is important on both top and bottom lines, and an improving profit margin is a great sign that a company's become more efficient over time. Since profits may not always reported at a steady rate, we'll also look at how much Seagate's free cash flow has grown in comparison to its net income.

A company that generates more earnings per share over time, regardless of the number of shares outstanding, is heading in the right direction. If Seagate's share price has kept pace with its earnings growth, that's another good sign that its stock can move higher.

Is Seagate managing its resources well? A company's return on equity should be improving, and its debt-to-equity ratio declining, if it's to earn our approval.

Healthy dividends are always welcome, so we'll also make sure that Seagate's dividend payouts are increasing, but at a level that can be sustained by its free cash flow.

By the numbers
Now, let's take a look at Seagate's key statistics: 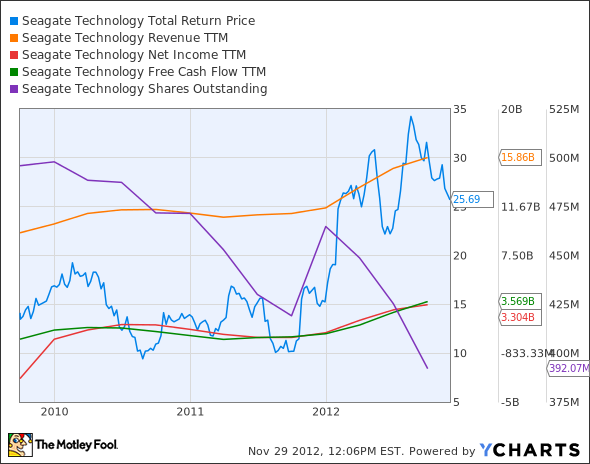 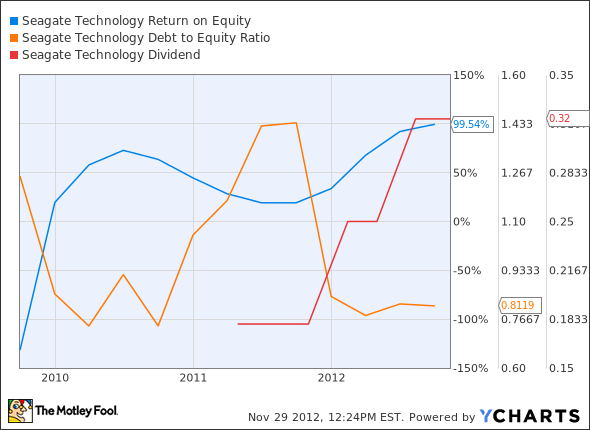 How we got here and where we're going
Impressive! Seagate is one of the very rare stocks that can earn a perfect score on this analysis. Part of this improvement may very well be due to Seagate's strength after flooding threatened to cripple hard disk drive manufacturing operations in Thailand. Western Digital (NASDAQ:WDC), Seagate's primary rival, hasn't enjoyed the same growth, as its facilities were harder-hit -- but the floods were over a year ago, and manufacturing capacity has been rebuilt. Can Seagate continue this impressive run now that its competition has caught up?

Despite PC market weakness, Seagate's still doing well. Its latest quarterly earnings came in below expectations, and forward projections are also weaker than expected. However, these expectations may simply be sky-high to begin with, as Seagate's current numbers are much better than its year-ago results. Seagate seems well-insulated against the PC industry's woes, thanks in no small part to the increasingly important role of cloud computing to the global software and services industry. Servers need storage, after all.

The threat to Seagate may not be so much PC-based as technology-based. Smaller, lighter devices are increasingly requiring solid-state drives, or SSDs, which access data much faster due to their chip-based design, but which also cost more per megabyte than the disc-based drives that currently dominate.

One of the hottest SSD manufacturers right now is Fusion-io (NYSE:FIO.DL), which has captured two lucrative data-driven tech giants as key clients. It's not profitable, however, as it's yet to capture a wider slice of the market. Seagate and Western Digital are countering the SSD threat with a somewhat silly premise -- injecting helium into their disc drive cases to lighten the weight. The idea might be enough to introduce worthwhile new efficiencies, though. Seagate is also rumored to be interested in acquiring SSD specialist OCZ Technology Group (NASDAQ: OCZ), which has been fighting its own supply chain battles recently. Seagate's size and close relationship with component maker Samsung (a major shareholder and former owner of a big chunk of Seagate's hard drive operations) should also work in its favor as the SSD battle takes shape.

Putting the pieces together
Today, Seagate has many of the qualities that make up a great stock, but no stock is truly perfect. Digging deeper can help you uncover the answers you need to make a great buy -- or to stay away from a stock that's going nowhere.