Some Apple suppliers are looking to diversify away from the Mac maker, since being in Apple's graces has always been a double-edged sword.

Not long ago, scoring a spot as an Apple (AAPL 4.08%) supplier was considered a huge boon for a company's top line. The promising volume of iPhones and iPads meant similarly soaring shipments of mobile components. Being an Apple supplier has always meant accepting a unsteady life, since reliance on Cupertino can cut both ways.

Reuters reports that numerous unnamed Asian suppliers are looking to diversify away from Apple to mitigate the inherent risks. One anonymous source even noted that some refer to the iPhone maker as "Poison Apple" due to its high standards and bargaining posture. Apple is known to use its weight to wrangle favorable component pricing out of its suppliers.

Apple also moves its product deadlines around frequently, as its supply chain is a living entity with numerous moving parts. Hiccups at one supplier can inadvertently hurt another supplier if the product's deadline gets adjusted. Reuters also corroborates other rumors that the iPhone 5S is running into challenges integrating a fingerprint sensor, which threatens to push its launch past June.

Riding Apple's coattails has always been a risky strategy for numerous reasons. 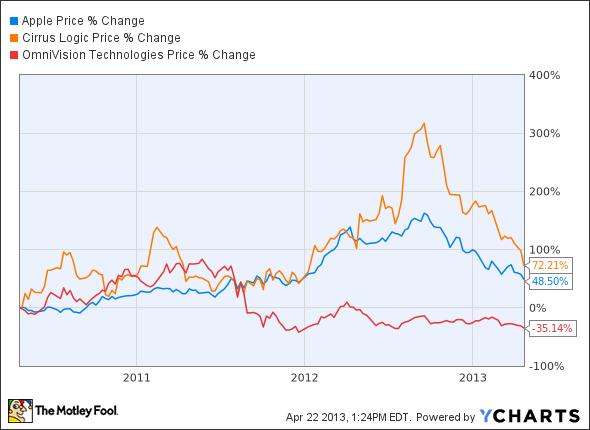 For example, audio codec supplier Cirrus Logic (CRUS 2.35%) issued a warning last week that crushed both its shares and Apple's shares. While Cirrus Logic has a lock on the audio codec spot, its reliance on the Mac maker (91% of revenue in the fiscal third quarter) can be painful if Apple sees a slowdown for its products. I consider it a buying opportunity that I plan on taking advantage of later this week.

At other times, Apple can drop a supplier from its products, which typically also leads to a drop in the supplier's fortunes. OmniVision (NASDAQ: OVTI) famously lost the primary image sensor spot in the iPhone 4S, which led to a price decline that the company still hasn't recovered from. OmniVision has regained its footing in overall sales, putting up a record $423.5 million in revenue last quarter, yet shares are still but a third of the price they peaked at in 2011.

The good news is that once Apple recovers, so will its suppliers, for better or for worse.