Please ensure Javascript is enabled for purposes of website accessibility
Log In Help Join The Motley Fool
Free Article Join Over 1 Million Premium Members And Get More In-Depth Stock Guidance and Research
By Morgan Housel - Apr 22, 2013 at 8:52AM

According to an LA Times article in 2011: "Some 75% of respondents said they were following the [California] budget debate, yet only 16% were aware that state spending has shrunk by billions of dollars over the last three years."

There may be something similar happening now at the federal level. Poll after poll will confirm that Americans are worried about the budget deficit. But how many of them know it's shrinking fast?

The Treasury Department issues reports on monthly spending and tax receipts -- a version of the government's income statement. Tally up the last four years, and you get this: 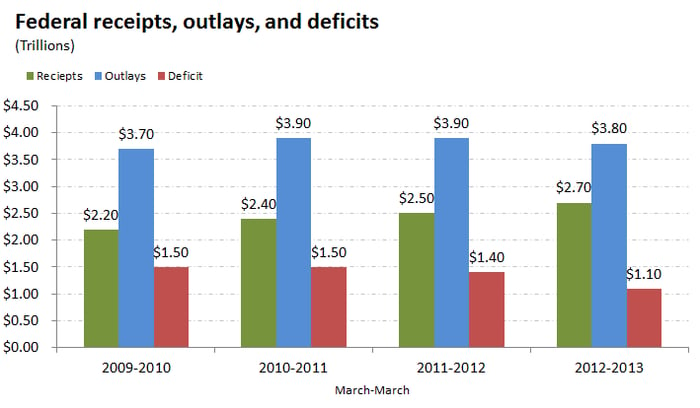 The federal deficit continues to shrink. Through the first six months of the fiscal year, revenues have come in higher than expected, while spending has come in lower than expected. As a result we are lowering our deficit forecast for the current and next two fiscal years.

We expect the improvement to continue for the next few years. Although we had already expected additional cyclical improvement and residual fiscal policy tightening to reduce the deficit further in 2014 and 2015, we have reduced our estimates a bit further, to $600bn (3.5% of GDP) and $475bn (2.7%).

The most important figure here is the deficit as a share of GDP, because as long as a government's deficit is lower than annual economic growth, it can run in the red forever while actually lowering its debt burden (people overlook this because it doesn't apply to households). Since 1930, the government has run an average deficit equal to 3.2% of GDP each year.

Goldman now estimates the deficit as a share of GDP will total 4.8% this fiscal year, and 3.5% next year. Over the last year, GDP grew by 4%. If growth stays pat and Goldman's estimates are right, the nation's debt-to-GDP ratio will stop rising as soon as next fiscal year (which begins this October).

Long term, the largest budget issue is the cost of health care its impact on Medicare. It will be a mammoth problem if not addressed. But the short- and medium-term budget outlook is likely far tamer than most imagine. Just like California in 2011, there is a gulf between perception and progress.