Please ensure Javascript is enabled for purposes of website accessibility
Log In Help Join The Motley Fool
Free Article Join Over 1 Million Premium Members And Get More In-Depth Stock Guidance and Research
By Alex Dumortier, CFA - Apr 22, 2013 at 10:15AM

Earnings estimates will come down.

Earnings: The week ahead
Each day of this week will see one Dow component report its results, beginning with Caterpillar (CAT -4.32%) today (see below), followed by AT&T, Procter & Gamble, ExxonMobil, and Chevron. Also note that Apple -- oddly, not part of the Dow -- reports tomorrow.

Caterpillar: When you're in a hole, stop digging
Dow component Caterpillar reported its first-quarter results before the opening bell this morning, and while the shares are responding well, up 0.3%, the numbers are hardly encouraging for the broad market. As the Financial Times' James Mackintosh neatly summed up in a tweet:

Caterpillar is the world's largest manufacturer of construction and mining equipment. Due to the nature of its customer base, the company's health is a barometer of global economic growth. In the first quarter, Caterpillar earned $1.31 per share, falling short of the consensus earnings-per-share estimate of $1.40. Revenue of $13.2 billion came in below the $13.7 billion estimate. Worse yet, the company indicated that full-year EPS for 2013 would be at the bottom end of the $7 to $9 range it had previously provided. Through last Friday, Caterpillar is the worst-performing stock in the Dow, having badly lagged the broad market during that period: 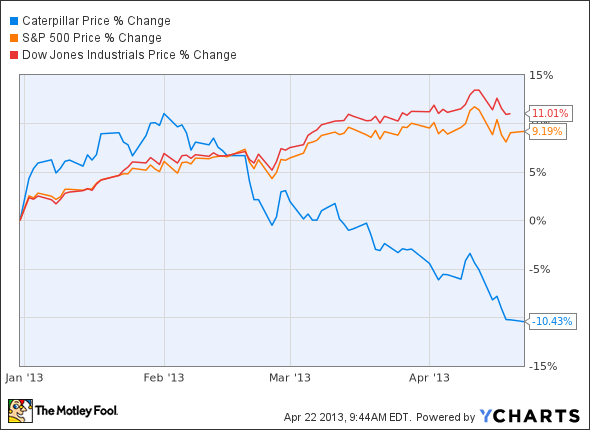 Caterpillar blamed a decline in demand for its mining equipment for the first-quarter miss. With the prices of multiple metals (both precious and industrial) having taken a fall since the end of the first quarter, that trend may well continue. While those factors are specific to Caterpillar, I believe the company is representative of the S&P 500 in one critical respect: Earnings estimates will have to come down. Anyone who thinks operating EPS for the S&P 500 will rise 13% this year is living in cloud cuckoo land.