Merck's stock is on a roll, but what could get in the way of a continued run? 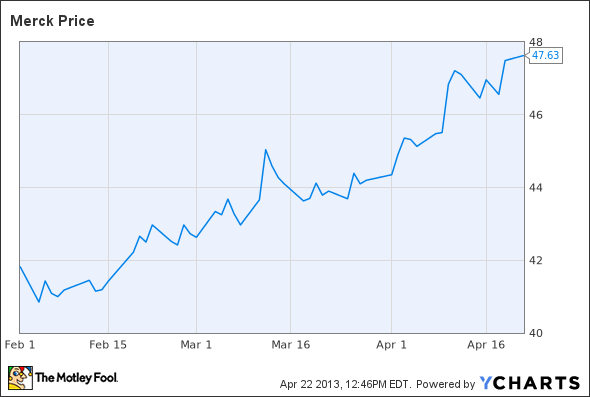 Since February, Merck stock has jumped nearly 14%. Will this nice stock run continue -- or is a roadblock right around the corner?

Migraine drug Maxalt went off patent in the U.S. in December and loses European market exclusivity in August of this year. Male pattern hair loss drug Propecia also faces generic rivals in 2013. These two drugs combined for more than $1 billion in 2012 sales.

Merck also continues to see lower sales from Remicade and Simponi, which brought in a combined $2.4 billion in 2012. The company reached an agreement with Johnson & Johnson (JNJ -0.98%) in 2011 to relinquish rights to market the anti-inflammatory drugs in several regions. Under the deal, J&J gained distribution for Remicade and Simponi in Canada, Latin America, the Middle East, Africa, and Asia Pacific. These territories represent about 30% of Merck's 2010 revenue for the drugs.

The good news for Merck is that diabetes drugs Januvia and Janumet continue to show strong growth. Potential rivals really haven't mounted a significant threat so far. Lilly's (LLY 0.34%) diabetes drug Tradjenta was approved in 2011 with some thinking that it could rapidly gain market share However, the launch for the drug got off to a relatively sluggish start. Boehringer Ingelheim, Lilly's partner for Tradjenta, cited an "economic headwind" in Europe and the U.S. that affected sales in 2012.

Most likely to succeed?
While there are several potential roadblocks for sustained stock success, probably the most likely to make a difference in the coming months is a failure in Merck's pipeline. Another experience like Merck had with Tredaptive could easily stop the stock's upward trajectory.

In January, the company pulled the plug on the cholesterol drug after Tredaptive failed to reduce heart problems and safety concerns arose in a large-scale clinical study. While the drug was not yet approved in the U.S., it had received approval in around 70 other countries. Merck subsequently pulled Tredaptive from those markets.

It seems unlikely that history would repeat itself with another drug in Merck's pipeline so soon after this failure, but anything is possible. The company has three drugs under review by the Food and Drug Administration and one under review by European regulators. Any negative news could send Merck stock downward.

I suspect that the drugs being reviewed by the FDA are more likely than not to receive approval. Merck and partner Endocyte (NASDAQ: ECYT) are seeking European approval for ovarian cancer drug vintafolide based on early stage and mid-stage clinical trials only. While the drug shows considerable promise, there is always a risk that authorization could be denied.

Perhaps the larger risk stems from the 16 drugs in phase 3 clinical studies. While a small number of failures in these studies probably wouldn't materially impact Merck over the long run, any bad news could take a toll on the stock in the short term.

When, not if
Overall, Merck is doing well despite declining revenue from Singulair and other drugs. I like the company's pipeline potential, especially for insomnia drug suvorexant.

The reality, though, is that the Merck stock run as of late will end at some point. It's a matter of when it will do so -- not if it will. I still like this big pharma over the long run -- the run that counts the most.