Walt Disney (DIS 3.33%) is turning to a god for help generating profits. Thor, specifically, the Norse god of thunder -- and in the Marvel comic book universe, a member of the superhero team known as The Avengers.

Chris Hemsworth returns in the role of the hammer-wielding, lightning-controlling warrior in Thor: The Dark World, scheduled for a Nov. 8 release in U.S. theaters. Marvel's U.K. team unveiled the film's first trailer this morning. Disney stock rallied marginally and set a new 52-week high of $62.54 in response:

The Dark World continues where Marvel's The Avengers -- last summer's top-grossing film -- left off, and builds on 2011's Thor. Only this time, instead of fighting Loki, played by Tom Hiddleston, Thor joins forces with his adopted brother to fight something greater. From the film's promo:

Thor fights to restore order across the cosmos ... but an ancient race led by the vengeful Malekith returns to plunge the universe back into darkness. Faced with an enemy that even Odin and Asgard cannot withstand, Thor must embark on his most perilous and personal journey yet, one that will reunite him with Jane Foster and force him to sacrifice everything to save us all.

Color me intrigued. Prolific comic book creator Walter Simonson took over the writing and art for "Thor" from 1983 to 1987, during which time he introduced Malekith the Accursed, a dark elf wielding vast mystical power. The resulting story arcs helped reestablish Thor as a must-read comic. Now it seems Disney is relying on Simonson's spade work to draw in film audiences. 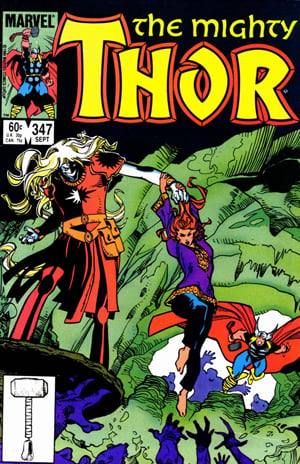 Can the plan work? It has so far. Thor produced $181 million in domestic box office receipts and nearly $450 million worldwide, according to Box Office Mojo. Hemsworth's second appearance as the Thunder God, The Avengers, earned $1.5 billion at the global gate.

Notably, Disney stock has nearly doubled since the company completed its $4 billion acquisition of Marvel Entertainment on Dec. 31, 2009.

In the years since, audiences have taken to comic-book-style serial storytelling in large numbers. And not just at Disney. AMC Networks and Time Warner have hit TV shows in The Walking Dead, a billion-dollar franchise in the making based on the long-running Image Comics series, and Arrow, based on the DC Comics superhero Green Arrow.

Thor is a different breed. An immortal. A king. In command of vast treasures in the otherworldly realm of Asgard. In visiting (conquering?) The Dark World, Disney shareholders are hoping the Thunder God will share the wealth. History says to expect him to do precisely that.