Will the run on magazines, guns, and ammo finally end with this latest development, or is there room to run?

Following a recent string of gun-related tragedies over the past year, few people were surprised by President Obama's efforts to enact legislation aimed at reforming the nation's gun laws.

Of course, equally unsurprising was the deep division of opinions regarding both the effectiveness and necessity of such legislation, which included a proposal to ban some semi-automatic weapons resembling military assault rifles. In addition, the bill had also recently introduced a number of amendments, the most significant of which aimed to expand background checks for gun buyers at firearms shows and on the Internet.

As a result, prices for both firearms and ammunition have spiked over the past few months along with demand, as worried consumers began to stockpile the products.

Sporting-goods retailer Cabela's (CAB), for instance, noted a 12% year-over-year increase in comparable-store sales last quarter, largely on the heels of a "surge in the sale of firearms and ammunition." What's more, the outfitter also stated that more than one in five firearms purchasers last quarter were to brand-new Cabela's customers, indicating just how many folks came out to buy guns and ammo before any new laws might have made it more difficult.

Meanwhile, Winchester ammunition manufacturer Olin (OLN -2.72%) has benefited from a relentless upward trend in ammunition purchases, which it says began the Saturday before Election Day. As of the company's most recent quarterly results, Olin management bluntly stated that the demand has only been "limited by product availability."

Sure enough, anyone who's tried to purchase ammunition recently is well aware of just how hard it is to find and -- if you can find it -- just how fast prices have risen as a result of the demand. That of course, is why Cabela's currently offers the following disclaimer on the firearms and ammunition page of its website:

Because of extraordinary demand, Cabela's complete line of firearm accessories, ammunition, and reloading supplies may not be shown here. Only in-stock items are displayed. Please check back often as our online assortment is frequently updated. Cabela's is limiting quantities of ammunition and reloading supplies. This limitation, which will be lifted once supply catches up with demand, will provide the best chance for the greatest number of our customers to fulfill their needs.

Investors who played the trend were certainly rewarded for their efforts; check out the performance of Cabelas, Olin, and gunmaker Sturm, Ruger (RGR 1.14%) from the time Olin says the demand spiked until last Wednesday: 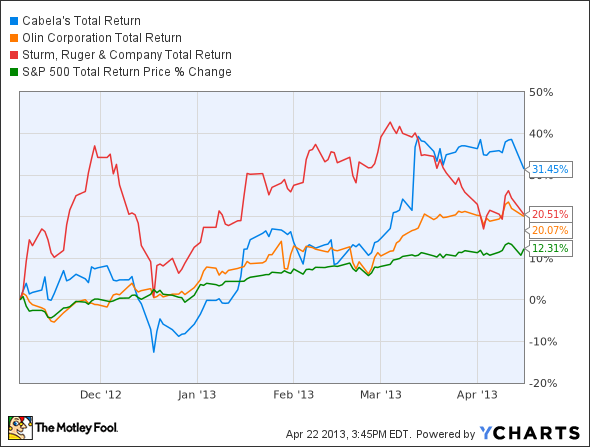 A president's lament
So why just until last Wednesday?

Because that's when, much to the chagrin of the president and his administration, the U.S. Senate shot down the vital background-checks amendment in a 54-46 vote, short of the required 60-vote threshold needed for it to proceed.

Curiously enough, the background-checks amendment was one of several introduced as a bipartisan compromise for conservatives, and it was largely viewed as having the greatest chance of passing the Senate.

While President Obama called it a "shameful day for Washington" and vowed to continue his gun-control efforts, the fact remains that, as it stands, the legislation appears to be dead in the water.

So what does this mean for businesses reliant on making and selling guns and ammunition? While they definitely won't be going anywhere anytime soon, many investors seemed to have read the writing on the wall the day following the Senate vote: Shares of Olin fell by nearly 2%, Sturm, Ruger fell 1.5%, and Cabela's dropped by around 5% last Thursday alone.

A deflating bubble
Consider the words of Olin CEO Joseph Rupp, who, when asked whether increased legislation would have any negative effect on ammunition demand, compared the current surge with previous spikes in demand:

[T]hat surge will end and we'll see a drop-off. I think last time we projected a drop-off in the 10% to 20% range over a two-year period. I think our thinking would be there would be something similar to that. The length of the surge, it's hard to project. But certainly, I think our statement -- I mean, getting it well into the third quarter is a pretty fair statement.

That "third quarter" statement, of course, is a reference to Olin management's previously outlined expectations of current demand lasting well into the third quarter of 2013.

In then end, however, consider this your advance warning: Rupp -- a man with much to gain and arguably the best seat in the house within the ammunition market -- is unequivocally stating that this bubble will eventually burst.

Fool contributor Steve Symington has no position in any stocks mentioned. The Motley Fool owns shares of Sturm, Ruger. We Fools don't all hold the same opinions, but we all believe that considering a diverse range of insights makes us better investors. The Motley Fool has a disclosure policy.