On Tuesday afternoon, Apple (NASDAQ:AAPL) announced that it would more than double the size of its cash-return program to $100 billion through the end of 2015, up from $45 billion. Many Apple investors -- including myself -- have been calling for Apple to return more cash to shareholders, and Tuesday's announcement followed through in a big way. First, Apple raised its quarterly dividend from $2.65 per share to $3.05 per share, beginning with next month's payment. Based on Apple's Tuesday closing price of $406.13, that corresponds to an annual yield of 3%.

Most importantly, Apple increased its share repurchase program from $10 billion to $60 billion. Apple plans to borrow some of the money necessary to execute this buyback, because while the company has $145 billion of cash and investments, most of this cash is held overseas and would be subject to a repatriation tax if used for share repurchases. Here are three reasons why Apple shareholders should be thrilled about this series of announcements.

1. You can stop worrying about the stock price.
While we are all about buy-and-hold investing here at the Fool, it's understandable for investors to become frustrated when a stock's price drops significantly. However, with Apple planning a large share buyback -- equal to roughly 15% of the company's shares at current prices -- there is a silver lining for investors. The cheaper the stock is, the more shares Apple will be able to repurchase, thereby boosting future EPS. The increased dividend also gives investors a more immediate reward for waiting. As long as Apple's long-term prospects remain intact, there's no need to worry about short-term stock price movements. Even investing legend Warren Buffett endorsed this strategy for Apple, saying that buying back shares when the price goes down helps build long-term value.

2. Apple will save cash.
Counterintuitively, taking on debt to buy back shares could save money for Apple. With the dividend now yielding 3%, there is a good chance that Apple will be able to float bonds with an interest rate below the dividend yield. For example, Microsoft (NASDAQ:MSFT) has taken advantage of its perfect AAA credit rating to issue debt on several occasions in recent years, frequently using the proceeds for share repurchases. In November, Microsoft priced five-year bonds at a 0.875% interest rate and 10-year bonds at a 2.125% rate.

Apple was assigned an AA+ credit rating by Standard & Poor's (and the equivalent Aa1 rating by Moody's), just one notch below Microsoft -- and at the same level as the federal government. For every $10 billion of stock Apple repurchases, it will save $300 million in annual dividend payments (based on Tuesday's closing price). If Apple can achieve a blended interest rate of 2%, it would only pay $200 million of annual interest for every $10 billion borrowed. (That interest would also be tax deductible for Apple, whereas dividend payments are not.) Rather than imposing a financial burden on Apple, debt-financed stock repurchases will actually help Apple's cash flow after accounting for dividends.

3. It's a show of confidence.
Finally, Apple's decision to turbo-charge its share buyback program shows that management is confident in the company's long-term prospects, and believes the stock is currently cheap. While Apple reported its first year-over-year earnings decline in a decade for Q2, and provided fairly bleak guidance for the June quarter, CEO Tim Cook sounded optimistic about the company's upcoming products on the company's earnings call.

Management's decision to buy back shares is obviously no guarantee that earnings will improve, or that the stock will go up. Microsoft returned more than $100 billion to shareholders from 2004-2008, and has continued to return cash fairly aggressively, but the stock has still dramatically underperformed the market over the past 10 years: 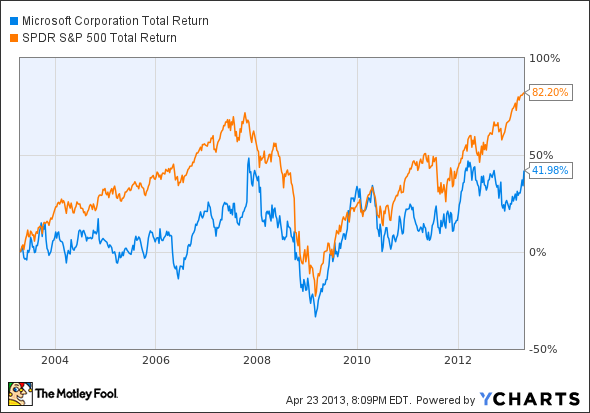 Microsoft Total Return vs. the S&P 500. Data by YCharts.

Apple investors should nevertheless be thankful for Tim Cook's confidence; it would be much more disturbing if management stated that it needed to conserve all its cash in order to fend off threats to its business.

A good decision
Apple may not be the Wall Street darling it was at this time last year, but it is still a strong company with desirable, differentiated products. The company's move to return cash to shareholders should boost long-term returns while also indicating management's confidence in the future. For Apple investors, that is definitely welcome news.