Please ensure Javascript is enabled for purposes of website accessibility
Log In Help Join The Motley Fool
Free Article Join Over 1 Million Premium Members And Get More In-Depth Stock Guidance and Research
By Carl Richards - Apr 24, 2013 at 10:40AM

People who've figured out how to delay gratification tend to have more success than those who haven't.

Eight years ago, Amazon.com created a premium shipping program called Amazon Prime. For a flat rate ($79 per year), you can get free two-day shipping.

BusinessWeek noted that "Amazon Prime may be the most ingenious and effective customer loyalty program in all of e-commerce, if not retail in general." It converts casual shoppers "who gorge on the gratification of having purchases reliably appear two days after they order, into Amazon addicts."

The phrase that sticks out to me is "gorge on gratification."

This reminded of a Newsweek article from a few years ago about how Americans are spending again, whether they can afford it or not. Not very long ago there was a belief that an entire generation of people had changed based on the economic tumult we experienced.

I'm not sure I agree that Americans are spending just like they were before, but there does seem to be evidence that we've forgotten, or will soon forget, what it felt like to be pushed to the brink.

We all know the old saying that old habits die hard, and nowhere does it seem to be more true than with our spending habits. They are awfully difficult to change.

Do you notice how often we're referred to as the "American consumers"? At some point, it seems that we stopped simply being citizens and became consumers, too. Along the way, we bought into the idea that shopping and spending money makes us happy and helps form our identities.

We are better and smarter than that, but witnessing the human stampedes on Black Friday makes it easy to see why we're all lumped in together as consumers. It also doesn't help if we buy into the message that we need to spend more money to keep the economy going.

So delaying gratification seems to be ever more difficult. As for Amazon Prime, how much harder is it to resist when you're promised delivery of whatever you want within 48 hours?

In the 1960s, a study at Stanford looked at our ability to delay gratification. The results, which included follow-ups decades later, indicated that people who've figured out how to delay, instead of giving in immediately, experienced greater success than those who haven't. 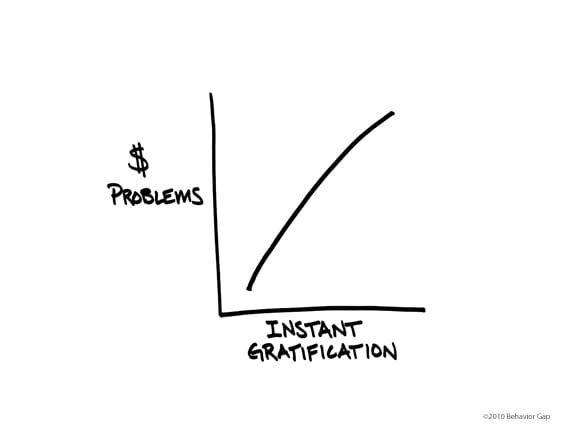 So how can you keep more money in your wallet?

1. Mandatory holding pattern. Before you buy something, stop. Add it to a list and let it sit for three days. Then, revisit the list.

It's amazing how something you absolutely had to have holds almost no interest to you after three days. I find this especially true with books. When I first signed up for Amazon Prime, I quickly found myself with a stack of books that I never started.

Now I use the wish list or shopping cart and let them sit. I have a very long list of books on my wish list that I have never ordered, and yet the world continues to spin.

2. Multi-week buying fast. The idea is to see how long you can go without spending any money beyond necessities.

This originally started for me when I entered every transaction into Quicken manually, and I got sick of entering so many transactions. So I tried to reduce the number of purchases.

In a crazy way, this can be fun. See how few transactions you can have in a 30-day period. If you use a credit or debit card, see how short you can make your monthly statement.

3. Tracking your spending. I know you're sick of hearing this suggestion, but the reality is that avoiding the same stupid behavior is quite simple: You need to measure and track spending.

Simple, but not easy. Things that get measured almost always improve. Tracking spending can also give you some sense of control, and that control can help build confidence that you can make changes.

4. A price tag on your goals. Do you have any idea how much it will cost you to send your child to college? How important is that to you? Is it more important than the new TV today?

These are not new ideas, but they do require hard-nosed discipline. So how has your discipline changed over the last few years? Do you think of yourself as an "American consumer" or have you decided to test your ability to delay gratification?