Please ensure Javascript is enabled for purposes of website accessibility
Free Article Join Over 1 Million Premium Members And Get More In-Depth Stock Guidance and Research
By Evan Niu, CFA - Apr 24, 2013 at 9:53AM

Apple's fiscal second quarter earnings was packed with new information for investors. Alongside modest beats on all relevant fronts, the Mac maker unveiled a massive new capital return program. Should investors have been more impressed initially?

Over the past seven months, Apple ( AAPL -0.32% ) has been engulfed in an endless spiral of negativity. Whereas once the Mac maker could do no wrong, overwhelming investor fear about deceleration and market saturation got the best of Apple, quickly turning it into a shunned stock.

Revenue totaled $43.6 billion, topping both consensus estimates as well as the high end of Apple's own guidance of $43 billion. Net income was $9.5 billion, or $10.09 per share. The company sold an impressive 37.4 million iPhones and 19.5 million iPads during the quarter. All of the above were better than muted expectations. Operating cash flow was $12.5 billion, and Apple finished the quarter with $145 billion in cash.

Gross margin came in at the low end of guidance at 37.5%. That level of profitability is down significantly from the all-time high of 47.4% seen a year ago, but quite frankly a 47.4% gross margin is a freak of consumer electronics nature. That's about the toughest comparison Apple's ever had.

Back to Mac outperformance
Mac units came in at just under 4 million, which was a modest 2% decline from a year ago. That's actually strong relative to the 14% decline that the broader PC market saw during the quarter. This relative strength was driven by strong desktop sales as Apple overcame iMac constraints, which was partially offset by declining laptop sales.

Nearly three years later, the iPhone 4 is still hot
Average selling prices for both the iPhone and iPad declined. iPhone ASP was negatively affected by product mix, as demand for the iPhone 4 is proving to be remarkably resilient. 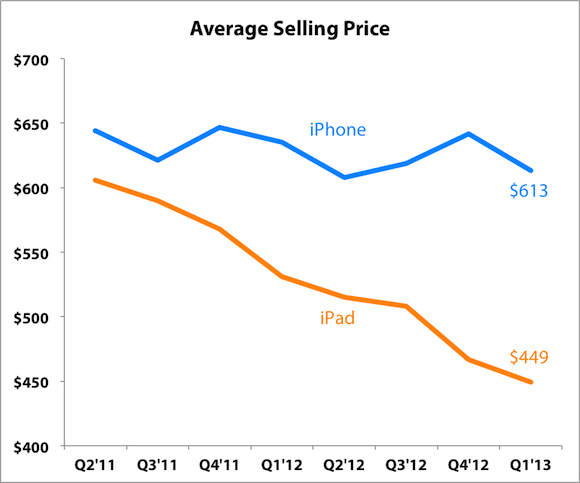 iPad ASP was always destined to fall with the introduction of the iPad Mini.

Apple abroad
As a testament to Apple's international expansion, it just set a new record with how much of its revenue comes from abroad. International revenue accounted for two-thirds of all revenue during the quarter. The "Greater China" segment continues to march into new territory, with a record $8.8 billion in revenue including retail operations. 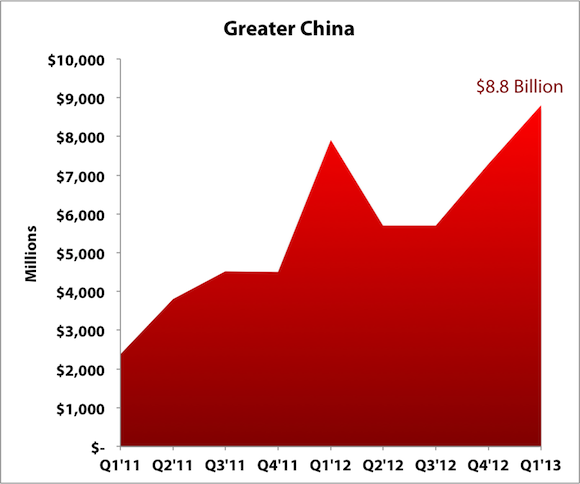 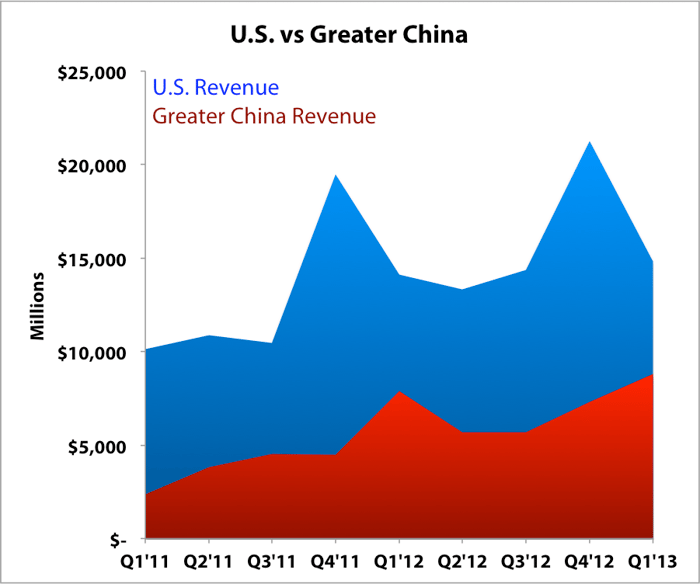 The Middle Kingdom is well on its way to becoming Apple's biggest market.

What a tease
On the conference call, Cook directly acknowledged recent investor concerns: everything from decelerating growth rates to margin contractions to dropping share prices. Cook noted that Apple's share price is largely out of its control. Instead the company focuses on what is directly within its control: creating innovative products.

Intentionally or not, Cook also provided numerous teasers for investors. He said Apple has "a lot more surprises in the works," and that he's looking forward to "potential exciting new product categories." The CEO also said Apple has a lot of new offerings to introduce "this fall" and that the company will "continue to augment" its ecosystem with "new services." When asked directly about his view on the current payments market, Cook said he thinks it's in its "infancy."

Those comments all hint at widespread rumors of an iWatch, iTV, iRadio, and mobile payments solution. Cook also implies that new iPhones might not be due out until later this year, contrary to current expectations of a June or July launch. This is what Steve Jobs always referred to when he characterized Apple as a "ship that leaks from the top."

Levering up
Perhaps the biggest announcement is that Apple has more than doubled its capital return program, at long last addressing shareholder criticism about capital allocation.

As a fan of superlatives, Apple pointed out that this is the "largest single share repurchase authorization in history." That's an incredible $50 billion increase in buyback clearance. That increase alone is over an eighth of Apple's entire market cap right now. Apple also boosted its regularly quarterly dividend by a modest 15% to $3.05 per share.

In order to pursue this program without touching overseas cash, Apple is making a bold move and taking on debt. The company didn't specify details, but CFO Peter Oppenheimer noted that one of the primary benefits would be to reduce Apple's overall cost of capital, a point I outlined previously after estimating Apple's cost of equity around 10% using the capital asset pricing model. Management and the board felt that "investing in Apple was the best" option.

To that end, Apple has earned an AA+ credit rating from Standard & Poor's n, the same rating as the U.S. government. The paper that Apple issues will be safe, indeed.

Mixed feelings
Guidance for the June quarter was below consensus, with revenue expected in the range of $33.5 billion to $35.5 billion. Gross margin should be 36% to 37%, a sequential decline primarily related to the loss of leverage associated with the sequential drop in revenue. At face value, there's something to be desired up top, and investors still don't have a good sample size to fully understand Apple's new guidance methodology, even after it just topped its outlook for the March quarter. Is there still a lowball factor? Check back in three months.

There was an awful lot to take in from the release. After initially gaining upwards of 6%, shares gave up all of those gains and then some. Judging by the initial reaction, investors are still trying to digest all the new data and are likely underappreciating the new capital structure initiatives.

Some investors may have been looking for more in a regular payout, but remember that to the extent that buybacks reduce shares outstanding the repurchase activity becomes accretive to earnings per share. Apple can buy an awful lot of shares for an extra $50 billion.

Buybacks get a bad rap because they're frequently badly timed, but with Apple trading at 9.7 times earnings following the new figures, it's hard to argue that shares are overvalued and that the timing is bad. Other investors have called for a "shockingly large" buyback program, which certainly fits the bill.

It wasn't a blowout release, but it definitely topped low expectations. Even if investors were left wanting more, Apple has just changed the conversation. This ain't your grandpa's Apple.