Cupertino is staring down a lost decade, straight ahead. 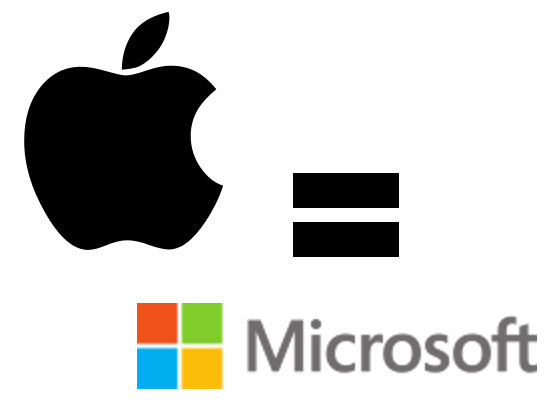 Image source: Company websites and my own Photoshop/GIMP skills.

Sure, Microsoft has about doubled its revenue and cash flow in the last 10 years. Maybe Cupertino will, too. Redmond is hardly in any danger of going out of business, and Apple's existing cash cushion would be enough to ensure its survival for decades to come. I'm not talking about total doom here.

But it's fair to say that Microsoft's creative juices dried up after the massive success of Windows XP and Office 2003. Neither of these flagship product lines changed much for years, because you don't change a winning team. Meanwhile, the company changed from "exciting tech titan" to "dull-as-dishwater dividend stock."

For investors, Microsoft has been nearly dead money for the last decade. The stock has underperformed its peers on the Dow Jones Industrial Average (^DJI 0.51%), even if you account for generous share buybacks and a reasonable dividend policy. The Dow gained 46% over that span, while Microsoft delivered only 31% returns -- including dividend reinvestments.

Redmond saw the creative cliff coming and attempted to shore the stock up with a brand-new dividend and drastically higher share buybacks. But the stock continued to drift sideways regardless.

Now Apple is making the same desperate moves, because it can't find a way around its own creative block. In last night's earnings call, CEO Tim Cook told investors that everything was fine and that there's "great stuff" coming down the pipe. But the last, oh, six or seven "great things" out of Cupertino have all been different takes on the same basic concept. The next one might be a wrist-mounted iPhone, or one built into a 60-inch LCD screen. Then again, even these somewhat creative takes on the iPhone idea may turn out to be nothing but rumors in the end.

These are not game-changing inventions, but rather more like Windows XP's service packs 7 and 8. Apple's creative peak was the first iPhone, and everything else is just a derivative of that. Change the concept too much and suffer the consequences, as Microsoft did with the radically different and disappointing Windows 8 platform. Stay the same and watch your customers get bored. Apple can't win here.

Consumers are starting to catch on to that catch-22, and even analysts are coming around. Many of my fellow Fools disagree right now, and the stock is still an official recommendation of several Foolish newsletters. But I have a CAPScall riding on the idea that Apple has peaked and will be dead money for years to come. That view seemed radical for a while. Today, the market seems to agree.