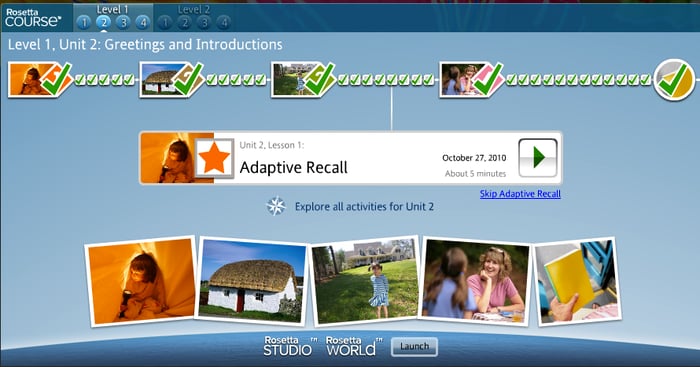 I've had a long, complicated relationship with language-learning company Rosetta Stone (NYSE:RST). The very first article I wrote for the Fool three years ago was on how the company, and its stock, was maturing into a winner.

Over time, and many failed moves by management, my outlook soured. In October 2011, after CEO Tom Adams stepped down without any successor in mind, I sold my shares.

And yet, now I'm considering adding the stock to my Roth IRA for May. I've been calling out one company per month for almost two years now, and the portfolio has returned 21%, beating the S&P 500 by almost 5 percentage points!

Here are the three big reasons I'm considering Rosetta for this month's pick.

1. Finally, a management team that knows what it's doing

During my first go-around covering the company, it became increasingly obvious that former CEO Tom Adams didn't understand his product and how to make it useful to consumers, schools, or businesses. It seemed like those working under him were far more equipped to run the company.

In fact, while taking notes during a conference call, I once noted:

I'm a big fan of Steve Swad, the CFO who joined the team within the last year. He's a straight shooter and really knows what he's talking about. ... twice now during the [conference call], CEO Tom Adams has begun to answer a question and Swad cut him off and gave an answer instead. ... he showed he really had a handle on what was going on.

It was a good sign, then, that later in 2011, the company named Swad as its CEO. Since then, he has been much more open about the company's strategy. That open stance included a visit to Fool headquarters in February as well -- and I was very impressed with what I saw.

2. A strategy in place
For years, Rosetta Stone had survived based on a hodgepodge of strategies that included extremely low-margin kiosks in malls and airports, combined with sales teams that tried to push the product to schools, governments, and businesses.

That has begun changing, en masse. The company has three clearly defined pillars on which it now stands: learning, technology, and changing lives. And in service of those three pillars, Swad has identified three strategic priorities:

In April, the company finally announced that it would be shutting down all of its low-margin and largely ineffective stateside kiosks. Instead, distribution is now shifting to the cloud, making it easier for Rosetta Stone to offer more affordable programs that are easily accessed via both desktop and mobile devices. In addition, instead of someone making a rather expensive, one-time purchase, the company can offer a subscription model with more reasonable prices spaced out over time.

3. Enormous opportunity
It's no secret that the world is becoming smaller. Even if rising energy prices make long-distance travel more prohibitive, our ability to communicate via the Internet isn't going anywhere anytime soon.

While Rosetta Stone currently gets 63% of its revenue from North American consumers, the opportunity abroad and in the educational community is immense. The company is aware of this opportunity, as it is piloting its ReFLEX initiative in South Korea and Japan before a probable release in mainland China.

And though -- from personal experience -- the software the company has developed is impressive, Rosetta Stone also realizes that there's no replacement for interaction with other humans who speak different languages.

That's why the company's recent acquisition of Livemocha is so important. As the company said in its press release, the acquisition "brings with it one of the world's largest online language-learning communities and a powerful, scalable technology platform."