Investors love stocks that consistently beat the Street without getting ahead of their fundamentals and risking a meltdown. The best stocks offer sustainable market-beating gains, with robust and improving financial metrics that support strong price growth. Does AeroVironment (NASDAQ:AVAV) fit the bill? Let's look at what its recent results tell us about its potential for future gains.

What we're looking for
The graphs you're about to see tell AeroVironment's story, and we'll be grading the quality of that story in several ways:

What the numbers tell you
Now, let's take a look at AeroVironment's key statistics: 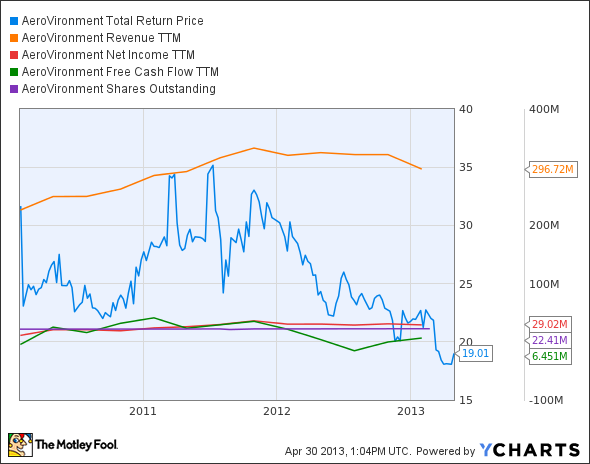 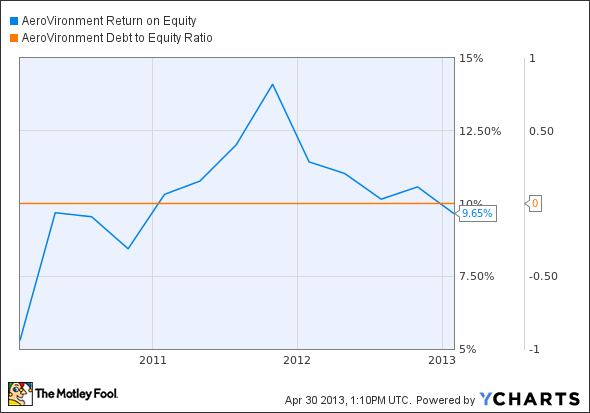 How we got here and where we're going
Despite a declining profit margin and decent (but not great) revenue growth, AeroVironment acquits itself well with an excellent improvement on bottom-line metrics. Five out of seven passing grades is solid, but investors may be a little concerned with the company's top-line growth. Can AeroVironment turn its share-price slide around with a few big orders, or has that unmanned aircraft left the tarmac?

AeroVironment actually finds itself caught in a difficult position between several major technological trends right now. On the one hand, unmanned aerial vehicles have taken the lead in far-flung military operations, and will eventually fly over American skies in the thousands. On the other hand, the American military is gradually pulling out of those far-flung operations and has focused on the use of missile-equipped Predator drones over AeroVironment's lighter craft -- and the day of a drone-filled sky is still years off. On the one hand (let's pretend we have four hands), AeroVironment occupies an important niche in the electric-vehicle infrastructure by supplying much-needed charging stations. On the other (other) hand, electric vehicles are still a few years or more away from widespread adoption.

My fellow Fool Rich Smith points out that President Obama's 2014 budget has a gaping hole where unmanned-vehicle funding should be. While this will undoubtedly hurt Northrop Grumman (NYSE:NOC) and Lockheed Martin (NYSE:LMT), the difference to these companies will be far less keenly felt. To understand why, all you have to do is look at a chart comparing the revenue of these two defense dominators to tiny AeroVironment's: 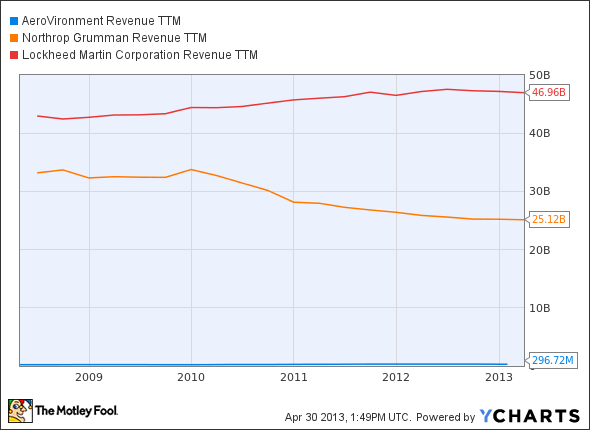 You can't even see the changes to AeroVironment's revenue on this scale, but the company's actually grown revenue by 38% over that time frame, a fair sight better than Lockheed's 9% growth and Northrop's ugly 24% decline. While the sequester is liable to dent the results of all defense contractors, small ones operating in unpopular niches will feel the pain most keenly. Small unmanned vehicles -- AeroVironment's specialty -- could find widespread use domestically once the skies are opened up for their transit, but that's years away, and AeroVironment needs to show growth earlier than that.

A nearer hope might be electric vehicles, which are gradually gaining traction in the marketplace. Unfortunately for AeroVironment, electric-vehicle vanguard Tesla (NASDAQ:TSLA) doesn't use its chargers, preferring to offer its own proprietary charger that (surprise, surprise) requires a custom installation, a task farmed out to Tesla founder Elon Musk's SolarCity.  The visibility of a Tesla partnership would have been a big help to AeroVironment, which already has to compete with the far larger General Electric (NYSE:GE) in a small EV-charging space. It's possible that GE might buy out AeroVironment to consolidate its gains, but if the smaller company doesn't offer any proprietary EV-charging advantages (and GE seems uninterested in the UAV space), such hopes are little more than a pipe dream.

AeroVironment has some big opportunities, but only for patient investors. Will the company hold onto its position while the marketplace shifts beneath them? That's the big question.

Putting the pieces together
Today, AeroVironment has some of the qualities that make up a great stock, but no stock is truly perfect. Digging deeper can help you uncover the answers you need to make a great buy -- or to stay away from a stock that's going nowhere.