Say what you will about Microsoft (NASDAQ:MSFT) Surface, but the software giant's first-party tablet just held its own. IDC has now released its estimates of how the tablet market fared in the first quarter, and Microsoft was able to rank as the No. 5 vendor worldwide with 900,000 units shipped. That's sequentially flat compared to the 900,000 units that IDC believes Microsoft also shipped in the fourth quarter.

That's particularly impressive considering most companies tend to post sequential declines coming out of the holiday quarter, which helped Microsoft climb the rankings. One contributing factor to Microsoft's resilience is the launch of Surface Pro, which occurred during the quarter.

Market leader Apple (NASDAQ:AAPL) still leads the way with 19.5 million iPads shipped, but we already knew that. Unlike the Redmond giant, the Mac maker did see a sequential decline.

The overall market put up a strong showing, more than doubling to 49.2 million units worldwide.

Samsung is deploying the same strategy in the tablet market that's worked well for it in smartphones. Since Samsung simply has no idea what people want ahead of time, the South Korean company just releases every imaginable form factor and sees what sticks, axing the rest. It offers every display size between 7 and 10 inches (Galaxy Tab 3 7.0, Galaxy Note 8.0, Galaxy Tab 8.9, and Galaxy Tab 2 10.1), with an 11-inch model reportedly in the works. If the above lineup (which is far from comprehensive) looks nonsensical, it's probably advisable to give up trying to understand Samsung's naming conventions. Sometimes the number refers to the product's generation, sometimes it indicates display size, sometimes it's both.

E-tail giant Amazon saw a troubling drop-off coming out of the holidays. The company saw units fall from 6 million (11.5% market share) in Q4 to just 1.8 million units (3.7% market share) in Q1. This isn't the first time Amazon has seen a steep sequential drop coming into the first quarter, though, as its Kindle Fire shipments did the exact same thing a year ago.

Google (NASDAQ:GOOGL) is also doing well with its Nexus 7, which comprises the bulk of ASUS unit shipments. Investors don't know exactly how many tablets Google is shipping, but it's safe to say the Nexus 7 is the majority of ASUS' volume. For example, consider its volumes before and after signing up for Google's Nexus program. 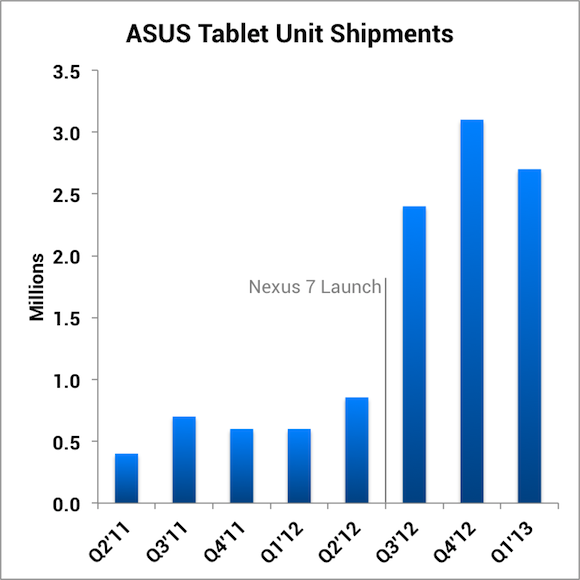 Sorry, BlackBerry, but the tablet market is here to stay.