U.S. stocks recorded another day of solid gains, as the S&P 500 (SNPINDEX:^GSPC) and the Dow Jones Industrial Average (DJINDICES:^DJI) rose 1% and 0.9%, respectively. That performance pushed the S&P 500 up to another all-time high closing price and to within spitting distance of 1,600.

Consistent with those gains, the VIX Index (VOLATILITYINDICES:^VIX), Wall Street's fear gauge, fell by 6%, to close at 13.59. (The VIX is calculated from S&P 500 option prices, and reflects investor expectations for stock market volatility over the coming 30 days.)

Who's the relic now?
Just as fund manager BlackRock celebrated the 25th anniversary of its Gold & General Fund -- the largest of its kind -- its manager, Evy Hambro, referred to the "barbarous relic" in comments to investors. Mind you, he wasn't speaking of the metal itself, on which he remains bullish. Instead, according to the Financial Times, he launched a scathing attack on gold miners, warning that this was what they might become if they didn't shape up their act. Hambro is concerned that miners have been issuing shares willy nilly to finance mining projects, with disregard for the impact on long-term shareholders.

He doesn't look wrong. Miners' dreadful stock market underperformance, over the past five years, relative to gold and the broader market is there for all to see. In the graph below, I've used the SPDR Gold Shares (NYSEMKT:GLD) as a proxy for gold; note that miners' comparison with stocks would have looked even worse, had I used the S&P 500's total return index. 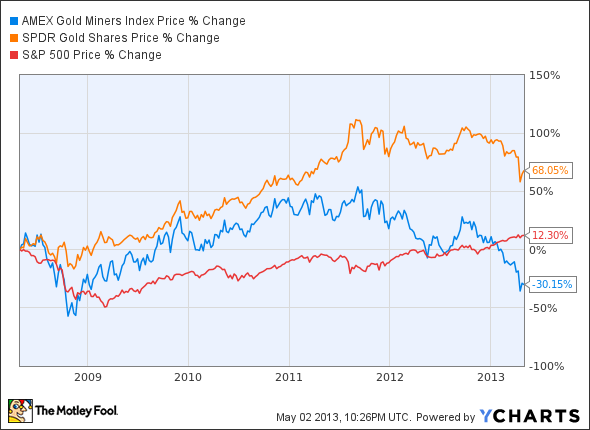 Roughly a quarter of the underperformance between miners and the metal has occurred in 2013 alone: 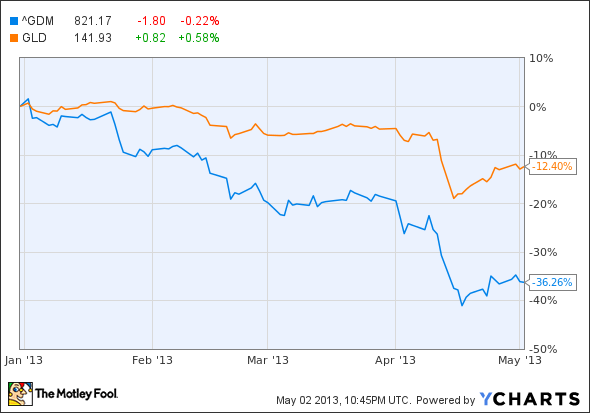 At least over this period, gold and gold miners have moved in the same direction, and it's simply the case that miners have been more volatile. (Miners' earnings are leveraged to the price of gold, so one would expect greater volatility in their shares compared to that of the yellow metal.)

If we compare the performance of a market-cap weighted portfolio of 10 large gold miners to that of the the same portfolio constituted on an equal-weighted basis, it's clear that some of the biggest names have been dragging the sector down. Last week, Barrick Gold (NYSE:GOLD) fell to its lowest price in 20 years, enabling Goldcorp to become the most valuable gold mining company. At little more than six times the estimate for next 12 months' earnings-per-share, Barrick's shares look cheap, but even making that judgement would probably require one be bullish on the price of the metal, which is hardly a safe position at this stage.

Forget Gold; It's the Miners Who Are the Problem @themotleyfool #stocks $^DJI $^GSPC $^VIX $GOLD $GLD Next Article
Current