Slowly, to be sure. And the monthly jobs report released by the Bureau of Labor Statistics is likely the most over-hyped and misunderstood piece of data in existence.

But here's what we've got: 165,000 jobs were created in April, pushing the unemployment rate down to 7.5% -- the lowest in five years -- even while the overall labor force increased. February and March's employment numbers were revised up by more than 100,000. With revisions, it now looks like more jobs were created in February than in any other month 2005.

Averaging together six months of jobs reports to weed out the noise, here's where we stand:

And here's a look at the various ways unemployment is calculated: 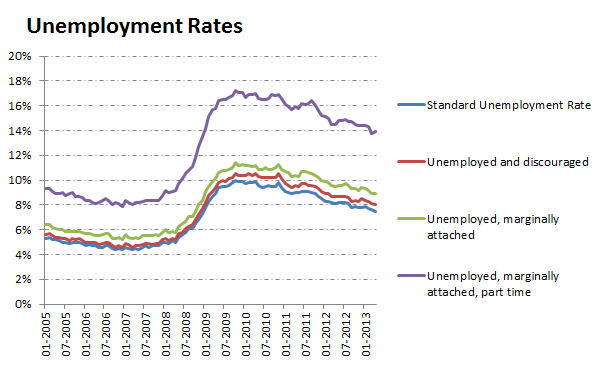 This is shaping up into a decent-looking picture. Are jobs growing fast enough? No. But the pace of job creation does seem to be accelerating. At the current trend of jobs growth, the unemployment rate will be about 6.8% a year from now, and 5% by mid-2015 or so. That is disastrous, given that the recession began in late 2007. But we are making progress. Slowly, and agonizingly. But it's there.