Tim Cook is no stranger to price umbrellas. Years ago on a conference call in March 2009 in his days as Apple (NASDAQ:AAPL) COO, Cook specifically noted something that Apple didn't want to let happen with the iPhone: "[O]ne of the things that we will make sure is that we don't leave a price umbrella for people."

A price umbrella exists if a dominant company is unwilling to budge on reducing prices, which invariably creates an opening for rivals to take shelter under with lower-priced alternatives.

Shortly after Cook's comments, Apple would begin its iPhone pricing strategy of lowering older-generation models to subsequently lower price points. Thanks to carrier subsidies, it was able to eliminate a pricing umbrella in most subsidized markets. For example, in the U.S., the iPhone is available for $0, $100, and $200 on contract.

This can't be said for the tablet market, though, where rivals are taking shelter under the $329 iPad Mini price point. 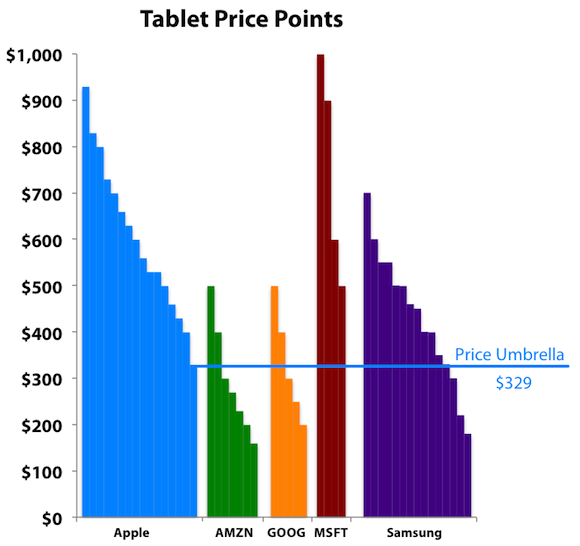 Amazon.com's (NASDAQ:AMZN) original Kindle Fire still retails for as low as $159, while Google's (NASDAQ:GOOGL) Nexus 7 starts at $199 along with Amazon's newer Kindle Fire HD. Samsung's cheapest tablet is the Galaxy Tab 2, which can be had for just $180. Microsoft (NASDAQ:MSFT) has chosen to challenge Apple head-on, with the Surface RT matching flagship iPad pricing at $500. The Surface Pro is the most expensive of the bunch, which can reach as high as $1,000.

Amazon, Google (whose Nexus 7 is built by Asus), and Samsung are having the most success at chipping away at iPad hegemony, thanks in large part to those low prices. Combined, they've made quite a dent in Apple's overall market share. 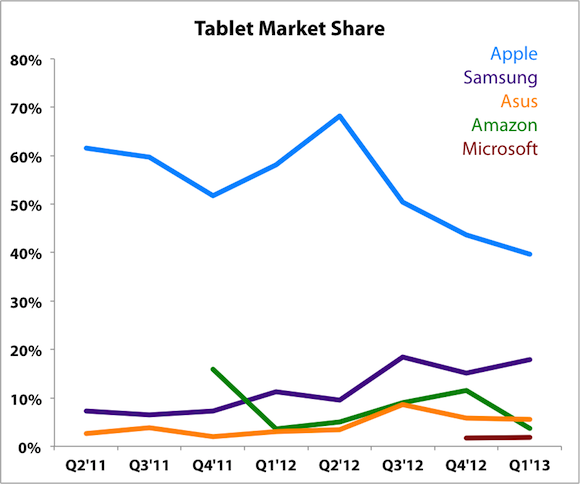 There's been recent speculation that Apple may be contemplating an iPad Mini price cut to put more pressure on the low end and to buy the company some time before a Retina iPad Mini is launched.

Still, Apple will always price at a premium to rivals, since it has a compelling value proposition. Because of this, there will always be a price umbrella in unsubsidized markets that Apple participates in. Even though its market share has dipped, those gains in the low end aren't profitable sales. Rivals may be taking shelter down there, but they're not making much money.