There was a time when Apple (NASDAQ:AAPL) was the top smartphone vendor in the world by unit volumes. Samsung would then proceed to use the same strategy it has used in other markets to come out on top with unit shipments: Infiltrate an industry by becoming a supplier to learn the nuances, and then move upmarket by imitating its customers.

Once the South Korean conglomerate jumps in, it aggressively taps its operational efficiency to release an astounding number of products in an attempt to overwhelm competitors with sheer volume. Since Samsung has no particularly strong opinions ahead of time regarding the specifics of what consumers might want, it literally tries everything. That strategy has paid off in smartphones, where Samsung now leads Apple by a healthy margin in unit volume. 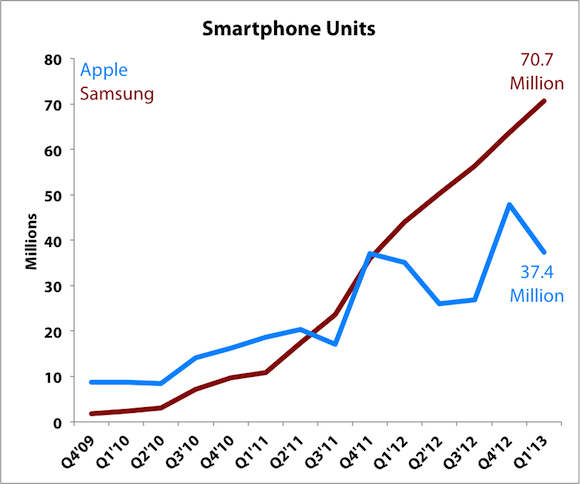 However, many of these units are low-end devices that aren't very profitable. While Samsung can lay claim to the title of "top smartphone vendor in the world by unit volume," it can't do the same when it comes to profit share.

Much as Samsung was fixated on an internal corporate goal last year to simply "BEAT APPLE" in the smartphone market, the company now wants to do the same in tablets. To that end, it's expectedly pursuing the same strategy of launching a slew of products encompassing every conceivable price point and form factor to see what works.

Importantly, Samsung is beginning to close the gap with Apple in unit terms.

Samsung's tablet strategy will use both Google (NASDAQ:GOOGL) Android and Microsoft (NASDAQ:MSFT) Windows, but mostly Android. The company current has 20 different tablet variants listed on its site, ranging from 7-inch displays up to 10-inch displays. Most run Android beneath Samsung's TouchWiz, but it also sells its ATIV tablet that runs Windows 8.

Unlike Apple, Samsung is more than happy to pursue low-end markets. It just announced the Galaxy Tab 3, a 7-inch tablet with low-end specs that will be the successor to the $199 Galaxy Tab 2.

Tim Cook has always tried to prevent price umbrellas, but there's no telling how low Samsung will go to achieve volume dominance.