Please ensure Javascript is enabled for purposes of website accessibility
Log In Help Join The Motley Fool
Free Article Join Over 1 Million Premium Members And Get More In-Depth Stock Guidance and Research
By Sean Williams - May 5, 2013 at 4:00PM

Cancer research is big business, and it pays to know where research dollars are headed.

As I noted nine weeks ago, cancer statistics are both staggering and disappointing. Although cancer deaths per 100,000 people have been on the downswing since 1991 thanks to access to more effective medications and better awareness about the negative health effects of smoking, there is still a lot of research and progress yet to achieve. My focus in this 12-week series is to bring to light both the need for continued research in these fields, as well as highlight ways you can profit from the biggest current and upcoming players in each area.

Over the past eight weeks, we've looked at the eight cancer types most expected to be diagnosed this year:

The skinny on kidney cancer
This year, nearly 60,000 people will be diagnosed with renal cell cancer. While less than thyroid cancer in number of new diagnoses, the chance of death directly from kidney cancer is considerably higher. In fact, more than 13,000 people are projected to die from some form of renal cell carcinoma this year.

If there is a positive light to be shed from a renal cell cancer diagnosis, it's that 62% of all cases are diagnosed in a localized state, which, according to the American Cancer Society (link opens PDF file), results in a five-year survival rate of 91%. Also, better treatments and better awareness about smoking have helped boost the overall five-year survival rate of kidney cancer from 50% in 1975-1977 to 72% as of 2002-2008.

Conversely, there aren't any current tests that help screen for early-stage kidney cancer, and diagnoses actually rose by an average of 3.1% between 2005 and 2009 despite a 0.5% average annual decrease in death rates. 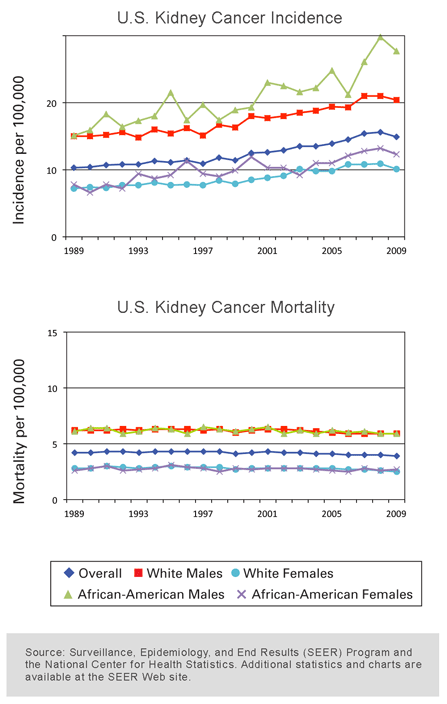 Where investment dollars are headed
Similar to what we saw last week with regard to treating thyroid cancer, surgery is a common option used to treat localized kidney cancer. In some cases ablation (using extreme heat or cold to destroy the tumor) can be used with success. ACS notes that radiation and chemotherapy tend to not have a huge effect on many stages of kidney cancer, but you'll find no shortage of anti-cancer therapies targeted at metastatic renal cell carcinoma. Here are a few of the most popularly prescribed therapies.

Despite this seemingly endless parade of advanced RCC treatments, there have also been some notable failures -- perhaps none more fresh than AVEO Pharmaceuticals' (AVEO -0.63%) implosion this past week. AVEO's lead drug, Tivozanib, provided a statistically significant median PFS advantage over Nexavar in late-stage trials, but it failed to produce a median overall survival gain compared to Nexavar. That confusing stat prompted the FDA's panel to vote 13-1 against recommending Tivozanib for approval. While not dead, it's going to take at least another trial it seems to justify Tivozanib's benefits.

Your best investment
The good news for kidney cancer sufferers is that there's a small army of late-stage treatments available that have proven successfully in extended patient quality of life. On the flipside, kidney cancer doesn't have a lot going on in the pipeline beyond AVEO's late-stage drug, meaning your best investment is likely to be found in an existing treatment.

From an investing perspective, while I like the steady growth I've seen from Pfizer's Sutent, I prefer Onyx Pharmaceuticals with Nexavar. Onyx is right in the biotechnology acquisition sweet spot -- being valued at $6.5 billion it's neither too small to be untrusted nor too big for a slow-growth big pharmaceutical company to purchase. Onyx's additional drugs (Stivarga and Kyprolis) provide supplementary sources of revenue that make it an attractive option over the long term.

Stay tuned next week, when we tackle the current and upcoming therapies for the treatment of endometrial cancer in this "Tackling Cancer" series.